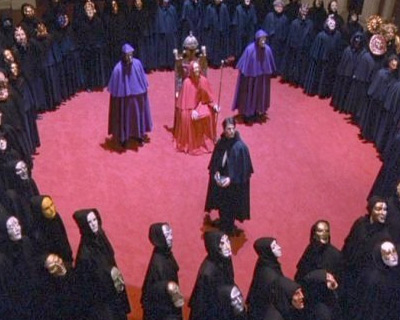 Steve: Edward Barlow is dead. You know there is a serial killer on the loose. He's based out of East Chicago, he's a businessman working for an electronics company, and he is part of an underground witch cult.

Zack: There can't be more than one businessman in East Chicago. But before we go looking for him, Kurt needs to do some studying. And by studying I mean playing a Doors album and riding the horse through that magic book.

Steve: The Book of Dzyan talks about many different cults, but curiously throughout the book the word fire and flame are highlighted in green. You also find a folded atlas map of the USA. There are dots all over the map. It looks like Barlow was keeping track of his victims.

Zack: Is there a pattern?

Zack: Kurt doesn't have it. How about Credit Rating?

Steve: You think that the pattern might have something to do with the stars, but you aren't sure what.

Zack: I crank Riders on the Storm and think about dying. When the junk wears off I will call Eazy-E and Left Eye and ask them if either of them knows anything about astronomy.

Zack: Lisa has astronomy. I'll have my agent fax her agent a copy of the map so she can take a look at it.

Steve: She figures out that some of the dots on the map correspond to constellations, but she can't figure out why or what it means.

Zack: I think it's time we head to East Chicago.