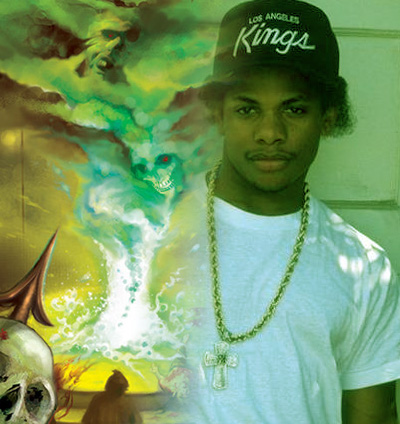 Steve: Kurt has wandered into the line of fire.

Zack: Damn it! Can E move to cover?

Steve: It's all smooth meat walls.

Zack: He'll move up. Left Eye will toss the molotov.

Steve: The bottle breaks and flame engulfs the man wearing the mask. His clothes burn to nothing and the mask seems to melt onto his face, but it does not go away. He is disfigured by it and his skin is roasted. He does not act as if it hurt though. He steps calmly towards you and finishes his chant.

Zack: Yeah, yeah, yeah. I was born to murder the world.

Steve: A green light begins to fill the chamber. The light above you coming through the meat ceiling turns green. Everything is green and you feel an intense presence in the chamber.

Zack: "LARD ROOM!" shouts Kurt. But E isn't having any of this. He is going to push Kurt out of the way and blast this burned up asshole right in the face.

Steve: The burned man begins to sing in a strange high voice as E approaches him.

Zack: E is going to blast that fool.

Steve: Before he can, the Song of Hastur makes E's skin begin to develop horrifying sores that sprout from his arms and creep up to his chest. Each moment he hears the singing more and more painful sores pop out of his body. 5 damage.

Steve: The shotgun explodes the man's meaty head in a gore burst like a special effect from an awesome movie. The singing immediately stops although E's arms up to his armpits are covered in sores.

Zack: That's okay he's got gallons of aloe vera back at the motel. A real west coast gangsta does not travel anywhere without lotion.

Steve: The green light that seemed to be growing brighter suddenly dies off and you are left in a stinking, dark meat chamber lit only by some of Left Eye's molotov.

Zack: Left Eye is going to drag Kurt out of there. E is only going to stick around to search for anything interesting.

Steve: He finds a copy of the pnakotic manuscripts written in Eblan and bound in the flesh of children.

Zack: "Aw dang I already had the paperback in Sumerian, now I got to re-read that thing?"

Steve: You escape from the meat basement as it begins to collapse in on itself. Eazy-E, Left Eye, and Kurt Cobain have saved the world from unimaginable horror.

Steve: But more horrors lurk at the threshold, waiting to enter our world and destroy it.

Zack: Well, next time Kurt is packing his heroin.