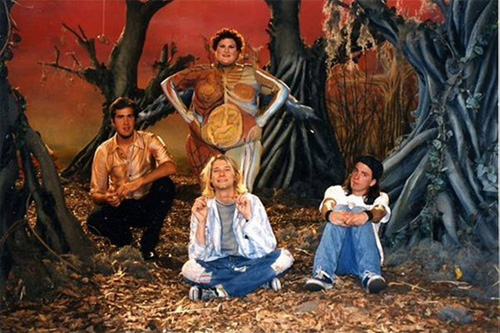 Steve: Ah, hallucinations. Okay, dude, haha. Kurt believes that he is inside his mother's body and that he is an unborn fetus. The strange drumbeat he hears is his mother's heart. He is not afraid. In fact, there is nothing scary at all. He is completely relaxed.

Zack: Kurt says, "It's so beautiful. And you guys are here too? I didn't know we were a family."

Zack: Lisa tells E to get a grip on Kurt. Nobody wants to go into the meat basement, but there isn't any alternative.

Steve: Okay, it's pretty easy to know where to go down there because you hear a steadily beating heart. The closer you get, the louder the heart gets. The meat hallway shudders around you and flexes its gristle.

Steve: He's struggling to keep Kurt under control. Kurt is just laughing and hugging up against the gross walls.

Steve: The hallway dips down, almost like a ramp, and then opens into a wide chamber with a low ceiling that seems to droop down almost low enough to touch your heads. Lights are behind the meat ceiling and move slowly around like flashlights heald underneath hands. It smells really bad in here. Like burned meat.

Steve: There is someone, you don't know if it's him, standing over a mutilated corpse. The figure turns. He is wearing a red robe covered in symbols that seem to glow. His face is covered by a mask with only one eye and no other facial features. The rest of it is like a flame design.

Steve: "So you have come to me at last? Did that failure dying from his suicidal disease send you? He was weak. He could not do the work of the fire."

Zack: Kurt is going to break loose from E and start stumbling towards this guy saying, "Mommy!"

Zack: That will free up E to draw his shotgun. Left Eye will light the cloth to one of her molotovs.

Steve: "Ha ha ha, you think your fire scares me? I am fire. I am light. I will make you pure and open the way for the beast that burns!" He starts chanting.

Zack: Eazy E is going to shoot him with the shotgun.