Next to the sadism of a game like Paranoia, and maybe very early Dungeons & Dragons and its dungeons full of death traps, no game is quite as cruel to player characters as Call of Cthulhu. Notes to the Keeper often encourage the grisly murder of characters to advance the plot and nearly every scenario features a moment when most or all of the players are likely to either perish or go completely insane. Recent years have seen the increasing popularity of modern and even futuristic Cthulhu scenarios, with a general increase in investigator firepower. For Mansions of Madness we return to the roots of classic 1920s horror adventure with this five-scenario collection of adventures involving mansions. Today's scenario: Mister Corbitt. 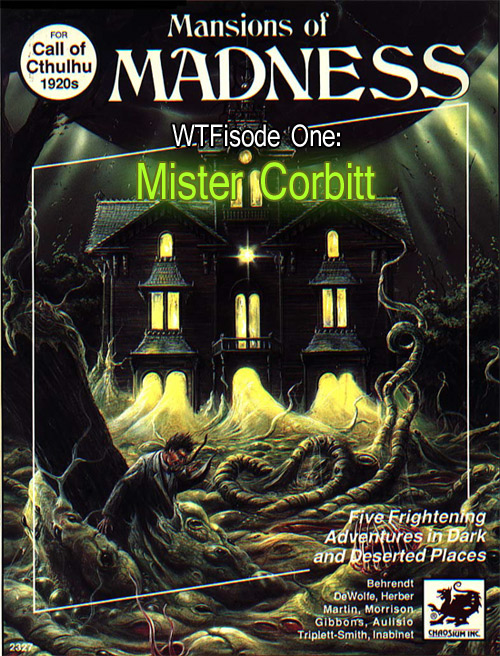 Zack: We should have saved this for Halloween.

Steve: Aw, come on, at the rate we finish these it will take us until then to get through all five scenarios.

Zack: Call of Cthulhu is one of those games that has an awkward system, lots of percentile dice rolls and weird random tables, but it serves the story to have tons of weird skill checks and unwieldy combats that can end in death with a single gunshot.

Steve: Yeah, right on, it's not a barbarian rampage type of game. It's like Sherlock Holmes or something if Moriarty was 200 feet tall and wanted to eat you.

Zack: Sherlock Holmes and the Godzilla of Gobblethorpe.

Steve: Since you know so much about Call of Cthulhu I think it is clear I should run the adventure. And you need to come up with a whole group of investigators.

Zack: Already done. My main man is Cecil Talbot. He cares for his aging mother at the Talbot mansion and uses her fortune to collect antique firearms, pornographic statuary and forbidden texts.

Steve: So basically the same interests as you.

Zack: He combines the pencil-thin mustache and affectation of John Waters with the bug-eyes of Steve Buscemi. He is equipped with linen pajamas, a silk Kimono he wears over the pajamas for additional armor, ladies' cigarettes, a 16th century marine flintlock adorned to resemble a devil penis, and an extra large mint julep. He enjoys throwing parties for his friends. He is also an incurable racist.

Steve: Dang dude you put way more thought into this than usual.

Zack: Cecil's companions are Wanda and Regina Shackleford, spinster sisters with shared interests in phrenology and seances, Pips Codswallop, the famed war aviator of England who was denied his official ace status and spent months in a sanitarium for insisting his fifth kill was against a giant black bat, Sharon Derriere, the bewitching stag film actress best known for The Virgin's Nightdress and her performance in 1922's The Mermaid and the Naughty Octopus, a film she does not remember appearing in which is so perverse the government has burned every copy it can find, and Chang the Celestial, an inscrutable oriental who harbors a dark secret: he is Mexican and just playing along with the racist white people who think he is Chinese.

Steve: Hang on, let me write all those down. I will have to play them most of the time.

Steve: This is going to be complicated.