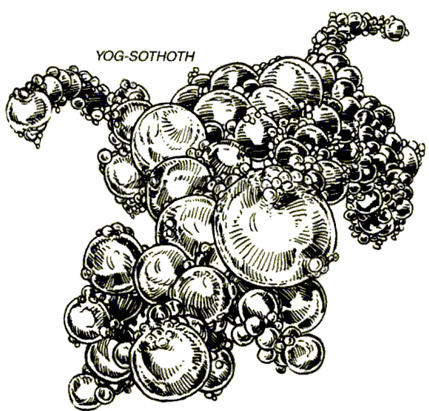 Steve: As you are gathering evidence, Mister Corbitt returns home. He interrupts you in the midst of filling a box with his diary and various grisly bits of evidence. Far from attacking you, he runs to the dead creature and collapses atop it, sobbing in despair.

Steve: "You've killed my child!" he wails. "All of it, for nothing. You monsters."

Zack: "He's right. Perhaps it was we who were the monsters all along." I draw my saber. "Nottttt!"

Steve: He starts chanting in a foreign language.

Zack: "Ugh. Speak English," I attack him with the saber.

Steve: Mister Corbitt is an old man and not particularly good at fighting. You and the others manage to kill him with your sabers, creating another body for the pile of the dead filling the basement.

Zack: "Stitch yourself up your own rectum," I tell him as I deliver a death blow. "Now we search the entire house."

Steve: You locate some mythos texts.

Zack: Let Regina take those, and somebody get Sharon up and help her back to my dear mother's mansion.

Zack: "Sorry, old bean," I say to the brain-shot corpse of Pips. Lacking pennies, I place ladies' cigarettes over his eyelids.

Steve: You return to your house and notify the police. They find it hard to believe your story, even with all the evidence, but there is proof enough that Corbitt killed the two policemen to give you a pass.

Zack: So what was happening?

Steve: Regina and Wanda research Mister Corbitt and discover some interesting newspaper clippings. Basically, his father died mysteriously in India and Corbitt married a woman who died during childbirth. His wife's death also drove the nurse at their house insane. Based on the journal, Regina believes Corbitt was a worshipper of a powerful cosmic entity called Ramasekva and this entity somehow sired a child with Corbitt's wife. The creature that resulted killed mother. Then, for unclear reasons, Corbitt began sewing limbs to the pitiful monster in preparation for some unknown future event.

Steve: Sharon Derriere will recover after a brief stay in a sanitarium. You only lost one party member. Not bad.

Zack: Next time, I'm running the adventure and you get to add a character to the group.

Steve: Okay, but you've got to be willing to kill off even Cecil.

Zack: It's Call of Cthulhu. I'll kill off the entire party if I want to.

If you're hankering for more horror from Zack Parsons, check out his novel Liminal States. It was recently reviewed by Tor.com.