Over the seven year run of 3rd Edition Dungeons & Dragons, Wizards released five numbered Monster Manuals, a Fiend Folio, a Monster Manual specifically about Forgotten Realms monsters, and a generous scattering of creatures appearing in other supplements. The worst monster catalog of all these was undoubtedly 2006's Monster Manual IV. Reviled by fans, it includes incredible amounts of filler padding out a collection of Third Edition's least essential monsters. Many of these creatures are new to D&D. There's a reason no one thought of them before: they're terrible. 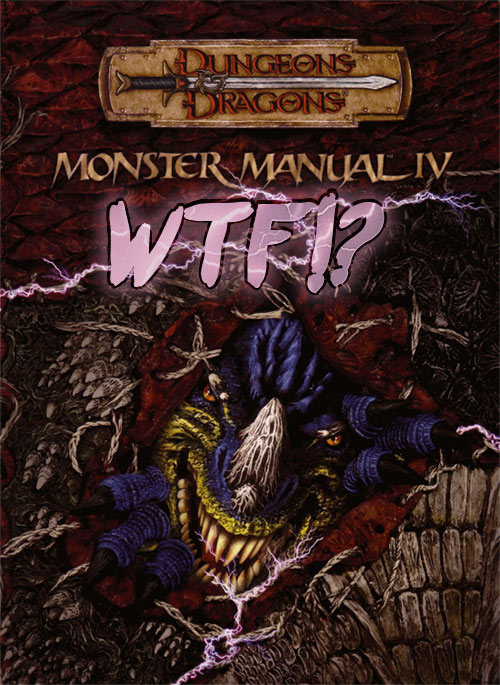 Zack: Theater of the mind.

Steve: Well I don't know what you were doing dude but I spent my Fourth of July in Pennsylvania and I saw a UFO while I was there.

Steve: It was cigar shaped and it just sort of hung in the air in broad daylight, sort of like blinking lights that were speed up strips in a racing game, and then it suddenly zipped away like it had somewhere more important to be. I'm glad it didn't abduct me or my girlfriend.

Zack: I'm having difficulty believing this wild tale of yours about having a girlfriend.

Steve: I'm not going to say her name because of the Internet. She is super hot and has a gigantic rack and also is really funny and smart.

Zack: And also her dad works for Nintendo and saw a secret version of Mario where Mario can grow two raccoon tails and also do fatalities. Am I right?

Steve: That's ridiculous on like five levels so I'm just gonna pick one: Mario would never kill anyone.

Zack: Tell that to the shattered plastrons of a thousand crushed koopas.