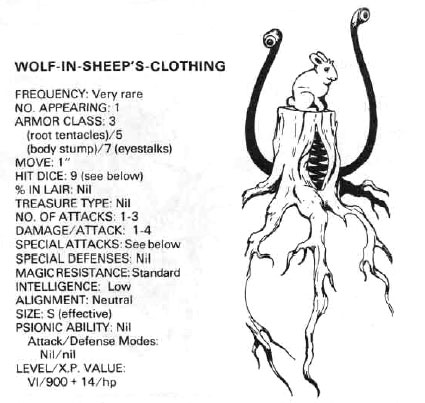 Steve: They got this from a real animal.

Zack: Don't even start with that.

Steve: It's in the rain forest. I saw it on Discovery Channel.

Zack: You saw a plant that looks like a tree stump, grows rabbits to trick animals, has eyes - EYES - on a plant, and attacks with tentacles and teeth? That's what you saw?

Steve: It's called a pitcher plant and it's like a beer pitcher at Pizza Hut, but with a lid for the pitcher. And when an animal comes around it bites it.

Zack: There's so many things wrong there I don't know where to begin. Can I just start with the PIzza Hut. Why Pizza Hut? Who goes in Pizza Hut? I would rather get robbed at a Pizza Hut than eat the food.

Steve: I haven't been there in a long time, but I used to get free personal pizzas for reading books.

Zack: When you were a kid.

Zack: Is that when you saw the documentary about the biting pitcher plant?

Steve: No, i think I saw that more recently. I don't think they had Discovery Channel back when I was doing the reading books for pizzas.

Zack: But the plant didn't have any of the qualities of this monster.

Steve: It tricks things into falling in and then it closes its mouth.

Zack: No it doesn't. No. A plant does not have a mouth.

Steve: Yeah, it just sat open like :O and it's full of juice and then little things come in for the juice and it closes up its mouth like :| and then it swallows.

Zack: You're an idiot and this never happened. The end.

Steve: I'm not making it up!

Zack: Plants can't have mouths! They don't swallow! And this plant you're talking about is nothing like the rabbit on a tree stump.

Steve: They both use subterfuge to get what they want.

Zack: So does a spy! Did they base this on Mata Hari?

Steve: Is that what the plant is called?