SJR8 Space Lairs is a collection of mini-adventures for the AD&D 2nd Edition setting of Spelljammer. The scenarios are very short (2-4 pages each) and focus on a single creature unique to the Spelljammer setting. Spelljammer is the strangest of all D&D settings. It proposes a space version of the D&D setting in which space is breathable, a bird can fly out of a planet's atmosphere, galleons and other vessels travel from world to world on invisible currents, and if you leave a ship you'll float around forever like a man lost at sea. Also there are space hamsters, kobold and goblin war fleets, space worms, giant aliens, and lots and lots of mind flayers. Trust us: it's worse than it sounds. 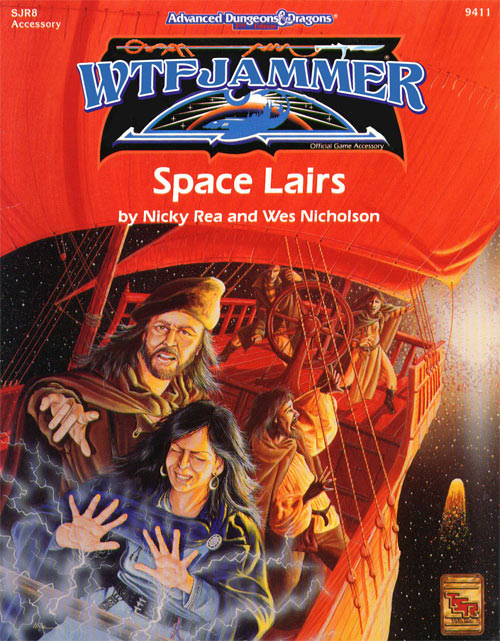 Zack: This is it, buddy. We're Spelljammin' it!

Steve: I think I'm almost as excited as the birthday I had at Dave & Busters when I got to do the Battletech game, but I got stuck in the pod that wouldn't turn to the right for some reason and ended up going in a circle until Jamie rammed me and we both blew up.

Zack: This time around we're doing an adventure, but we're doing something a little bit different. It's a series of unrelated scenarios and I figured that would be a prime opportunity for Steve to come up with an entire cast of characters. A spelljammer full of them. He had advanced warning.

Steve: I did it, dude. I think you're gonna like what I came up with.

Zack: Alright, stop teasing it. Let's hear what you came up with.

Steve: The Captain is James Tiberium Widowmaker. Tough, but fair. Gets along well with the ladies. Lady Spocklore, his right hand sexy babe wizardess and sensual lover.

Zack: I sort of want you to die right now. Scotty 8 Kobolds?

Steve: Yeah, he's actually 8 kobolds. They call him Scotty, but there's no real "him" it's just 8 kobolds.

Zack: Of course. And you had to go with the Star Trek theme.

Steve: I was afraid Chewbacca the Owlbear would be pushing it.

Zack: Just to note, Steve is not actually supposed to be using beholders and kobolds. The available races and classes are those from normal D&D. All the Spelljammer stuff is just a setting, after all.

Steve: Just the best setting ever.