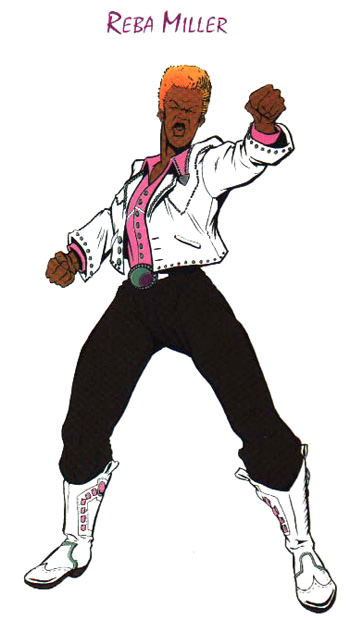 Zack: I would like to begin by noting that we never start with the most ridiculous entry when we do these. So, be prepared...

Steve: It says she was born during a fight. I hope her mom wasn't wearing jeans at the time or that would have been really awkward.

Zack: She looks like she was born through a Play-Doh Fun Factory press and dressed by a child.

Steve: Pink, white, and green is a color combo you don't really see too much. Not on the covers of magazines at least.

Zack: It's a combination too repulsive for our Western eyes, but I bet they used it in the Soviet Union to paint the insides of asylums. Generations of oppression gradually removed the Soviet ability to judge things aesthetically and replaced it with concrete blocks and rods of uranium.

Steve: Reba seems like the sort of character you would get in the video game when you get frustrated trying to beat your buddy and you just say "screw it" and hit random select.

Zack: Also, when did country music ever "pretend to be cool?"

Steve: Was it when Garth Brooks started flying around over his concerts on a swing like that nightmare I had where my parakeet turned into a fat cowboy?

Zack: I think it was that time Johnny Cash sang "Hurt" and everyone loved it because he was old and dying and not Trent Reznor at age 28 writing it after doing some special drug that only he had called Drooosh off the tits of naked models in a French Quarter hotel.

Steve: Whoa, that doesn't sound "pretend cool" at all. That is seriously real deal cool.