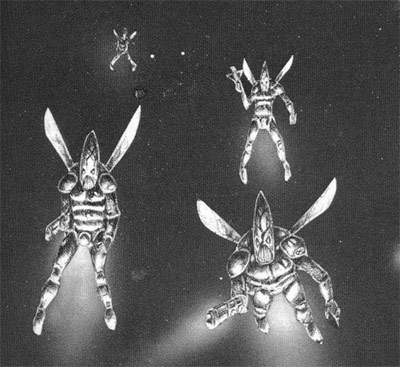 Zack: The wraithbone buzzes to us!

Steve: Dang I forgot all about the bee men aspect warriors of the Eldar.

Zack: Jet packs and bee wings and gun arms and little shuriken catapults that look like crossbows. The only part even close is the helmet, but even that is wrong. Like the artist thought that was their head.

Steve: I like these dudes better than the current Eldar dudes. Those guys are all about feelings and runes. These guys look like they might have been woke up by an atomic test and they're getting giant.

Steve: The Avatar is a big queen bug thing and she has little worms that fight alongside her. That's way cooler than some mopey space elves.

Zack: Waaa our race is suffering from colony collapse disorder. Mankind is killing us with his cell phone towers.