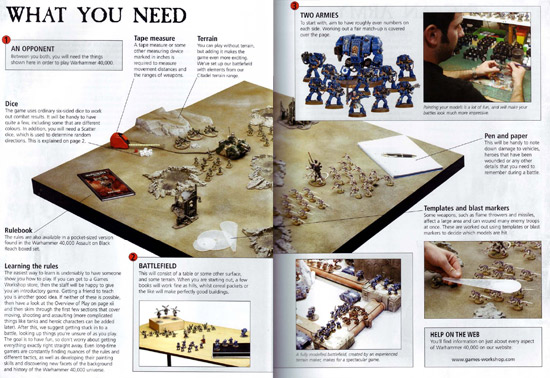 Zack: A free social calendar. If you so much as pencil in your cousin's wedding on a Sunday you've got too much of a life for the hobby. Free up some time.

Steve: Some chairs, because you'll get tired standing around all the time and you might want to take a load off when those dogs start barkin'.

Zack: Asperger's, to explain why you had that fit over line of sight in turn two that culminated in you throwing the Lord of Change at your friend's face.

Steve: Some cups. Better get some cups in case someone wants to share a pop or maybe they don't like drinking it out of the can. Get some cups. Only if you allow drinking around your gaming table.

Zack: Thousands of dollars to waste on collecting junk and paints for junk. In the years it takes you to buy and assemble a large army Games Workshop will come out with a new army or a new version that renders yours obsolete, so you'll need thousands more dollars.

Steve: Respect for the rules and the situation. Don't put your feet up on the table or walk all over someone's jigsaw puzzle. Don't cuss in a hobby store because children might be around. Practice G-rated cusses if you have to. There are some in the Farmer's Almanac.

Zack: Did you seriously just warn people not to walk on a jigsaw puzzle?

Steve: Good tunes that everybody likes. You don't want them to be too loud or disruptive though. I like to put on the Return of the King soundtrack, but some people think it's too intense. Find something that work for your group.

Zack: I like to play an emergency alert tone for 20 minutes, followed by a looping mp3 of the "pull up" cockpit warning in commercial airliners.

Steve: Snacks are important. You have to get the right snacks. You don't want Cheetos or something that leaves residue on your fingers. Pizza can be messy too. My group likes pretzels and M&Ms, but there are plenty of possibilities.

Zack: Alright, Steve, we get it.

Steve: Take a Break if things get too heated. If there's an argument or something take a time out and watch an episode of Family Guy or Tim & Eric. I keep my DVDs by the TV in the garage where I have my gaming table. Spaghet! I'm Spaghet! You know, with the spaghetti sauce around his mouth?

Zack: I am familiar with that character.