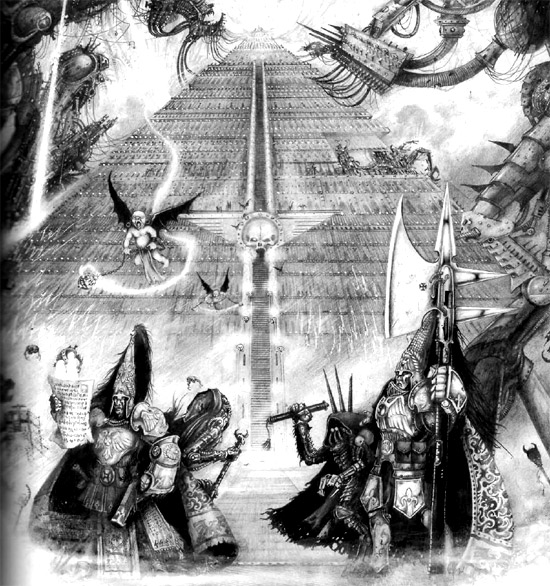 Zack: I think most people would say atmosphere is crucial to 40K's success.

Steve: It's grim and dark, like you said. And there is only war. Pretty much as advertised. Lots of big battles. Skeletons everywhere. Dead bodies. Monsters. Robots.

Steve: Yeah, there are robots. Skull robots they call servo skulls. And the Necrons are like robots.

Zack: The Necrons are the skeleton army that shoot glowing green crap everywhere and live in floating pyramids. So your two examples of robots in 40K are both skeletons.

Steve: Well it is grim and dark.

Zack: Everything has to be grim and dark all the time?

Steve: There is only war.

Zack: That's impossible. There has to be people getting married and having kids and going to school. The galaxy wouldn't function without all that stuff. They wouldn't be able to have a war.

Steve: Oh, this again. Your whole "Where does Chaos get drinking water?" thing.

Zack: It's a valid question. Just because they're evil doesn't mean they can stop drinking water.

Steve: You're talking about demons from another dimension 38,000 years in the future.

Steve: The reason is that NASA is going to get its rovering butt kicked by some serious skull-faced bad dude with a chainsaw.