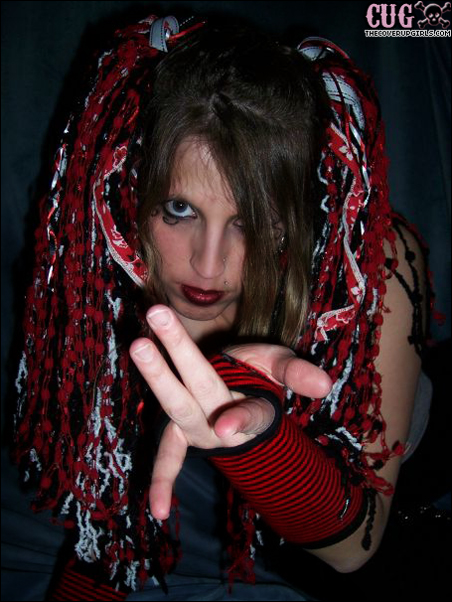 Zack: I keep hearing "thwipt!" in my head; only I didn't think it was possible for a sound effect to lisp.

Dr. Thorpe: She's like some kind of mythical creature that hypnotizes people and then beckons them to her so she can kill them and integrate them into her hairdo.

Zack: She's definitely the kind of creature that you have nightmares about when you go to sleep in the creepy guest bedroom with all the dolls at your grandmother's house.

Dr. Thorpe: "Each string of beads represents the soul of a doomed man, and also another year of working in a head shop and hoping to god my 45-year-old boyfriend doesn't get me pregnant, because I can't afford health insurance and Planned Parenthood said I hit my limit on freebies."

Zack: She may be on her way to her fifth abortion, but at least she's protected herself from carpal tunnel.

Dr. Thorpe: She looks like she was applying eyeliner on a bus and it hit a bump.

Zack: She looks like her mom was applying eyeliner on a bus and accidentally drank constantly throughout her pregnancy.

Dr. Thorpe: You know, as funny as that is, I think I have to disagree. It would be easy to blame this on genetics, but her eyes really aren't wide-set enough for that, so I think we have to consider an even more disturbing possibility: she chose this for herself.

Zack: How can you tell how widely set her eyes are? She's so ashamed of her looks she's practically wearing a druid's hood woven out of her own mouse-brown hair.

Dr. Thorpe: She is pretty overwhelmingly mousey, even under all that. I think this is all just some kind of defense mechanism: "now they can NEVER call me 'plain!'"

Zack: Yeah, it's the shitty cheapo version of the reaction that makes women get breast implants, it just produces results you can't put your penis between. I mean you could, I guess, but it would just get tangled up in all those ribbons. They probably have cutting edges.

Dr. Thorpe: Maybe she works for Webster's Dictionary, and her boss called her and said "we need a new illustration for 'festoon' and we need it NOW!"

Zack: Unfortunately, she never made it in because the illustration would have been too similar to the one for "parental shame."