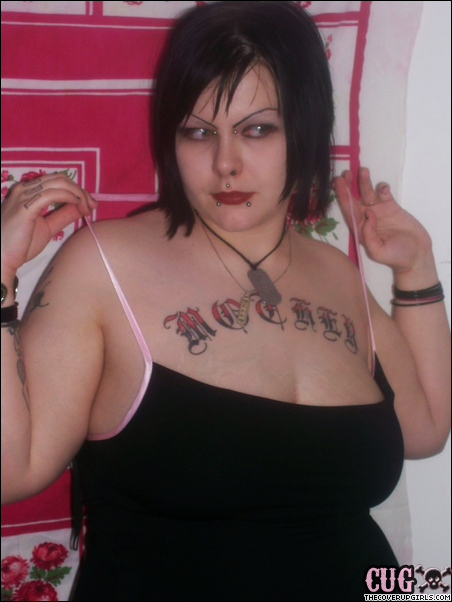 Zack: She really should not have asked for that Red Ryder BB gun for Christmas. She shot most of her face out with it.

Dr. Thorpe: I can make out the "M" and the "O," and maybe an "E," but I think that for the most part the tattoo artist was just making things that sort of looked like letters.

Zack: She could probably rob a bank doing what she's doing with the straps of her shirt there. Just lift them up and wiggle them, menace the person behind the counter with the threat that she might reveal the butt on her chest.

Dr. Thorpe: She's looking a little bloodshot. She must have a pretty rugged skull, because it looks like they snapped off a few ice picks while they were performing the lobotomy.

Zack: I wonder if there is some alternate continuum to ours where this is what people look like when they're trying to get important or high-paying jobs. Like somewhere out there is a guy in a 3-piece suit working behind the counter of a Coconuts suggesting a Rancid album to a guy in a blazer.

Dr. Thorpe: Even in that world, this girl would probably be dying her hair and snapping fake piercings into her face to look presentable for her job at Blockbuster.