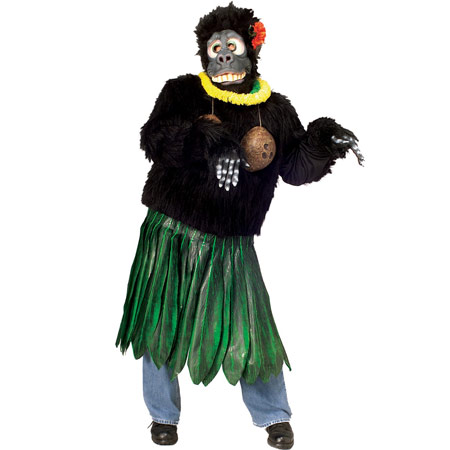 This ape is great at shaking his grass!

No need to apologize for monkeying around, the Aloha Gorilla is always up for a party! This deluxe adult costume includes: a latex character mask, a tropical flower pin, a colorful lei, fur shirt with attached coconut bra, and a grass skirt.

Dr. Thorpenstein: This year, I'm dressed at whatever pieces they've got a surplus of at the costume factory.

Zackula: The Democrats are gonna be sooooo pissed. It doesn't even look like Michelle Obama.

Dr. Thorpenstein: Yeah, I mean, they're clearly going for the cheap Michelle Obama joke, but she's not even FROM Hawaii! That's Barack!

Zackula: The choice to wear jeans with this costume is just disrespectful. A grass skirt AND jeans? You go too far, Hawaiian gorilla bellydancer
.
Dr. Thorpenstein: Maybe that's the third random costume element to complete the trifecta of unrelatedness. Ape + hula + ...plumber?

Zackula: The one review for the costume is someone complaining it was missing some of the components. Seems like maybe less is more with this outfit. Maybe streamline it a little bit.

Dr. Thorpenstein: There's really no missing element that could make this a worse or less cohesive costume.

Dr. Thorpenstein: Are any of those really any dumber than hula gorilla?

Zackula: You know what this really needs though?

Dr. Thorpenstein: Or maybe a sign that says "BEWARE!" and some blackface?

Zackula: Ooh that's good. And step in a couple of Christmas presents on your way out the door to the party.

Dr. Thorpenstein: And maybe some big potato eyes. And ditch the hula gorilla shit, because christmas blue jeans shocker blackface potato guy is a pretty great costume without all the weird random crap thrown on.