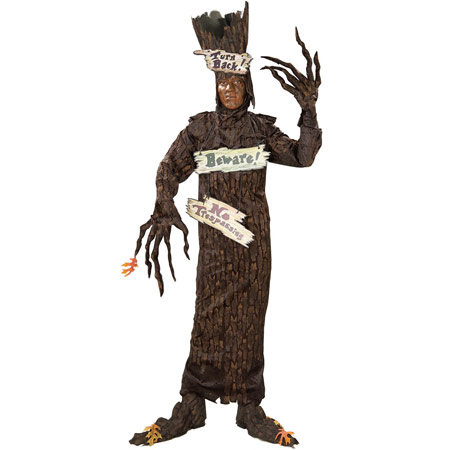 Are you ready for All hollow's eve?

Scare off anyone who dares to enter the haunted forest. If they don't heed your warning, let them suffer their imminent DOOM! This Haunted Tree costume includes a robe with attached warning signs and headpiece. Shoe covers that make it look as if the roots are going into the ground, and gloves with finger tips that look like creeping tree branches are also included.

Dr. Thorpenstein: Even if you're the kind of idiot who goes into a Halloween shop and buys a prefab costume, how low does your self-esteem have to be that you'd look at all the draculas and spooky masks and hilarious pun costumes and settle on being a fucking tree?

Zackula: Have fun opening a beer while you try not to be noticed by any of the people you're afraid to talk to at work.

Dr. Thorpenstein: Remember in Big when Tom Hanks is explaining to the board members of the toy company that a building that transforms into a robot is no fun because buildings don't do anything?

Dr. Thorpenstein: This costume company clearly does not have a Tom Hanks among its ranks to say "hey, wait a minute fellas, it's just a tree!"

Zackula: On the other hand fans of blackface finally have a costume to wear without offending black people. Much.

Zackula: Harry Connick would still give it a 0, but purely for aesthetic reasons.

Zackula: "Shit costume. Zero. Fucking zero. What a fucking shit costume. And not because it's racist, it's just a real shit of a costume being worn by a human piece of shit." And then he walks off the show, forcing Australia to confront what a shit country full of human pieces of shit it is.

Dr. Thorpenstein: Yeah, but when it inevitably gets too hot and unwieldy and you take it off, you're just standing there in a t-shirt, jeans and Al Jolson makeup.

Zackula: In that case you just take the beware sign and put it around your neck and borrow the hangman's noose and you can be a lynched freedom rider.

Dr. Thorpenstein: Even so, you'd better hope there are no black people at the party! (There aren't, obviously. They're across town at the party where people aren't dressing like goddamn trees).

Dr. Thorpenstein: Also, every sign hung on your costume ups the odds by another 10% that a drunk guy will mistake you for the men's room.

Zackula: Yeah, good point. Great costume choice if you want dudes to unleash streams of urine on you. Really drench your deciduous dong. Soak your barky butt in hot piss.

Zackula: Fantastic costume for that.

Dr. Thorpenstein: Even without the sign, you're definitely going to get peed on by a dog, even if the dog is sober as a judge.