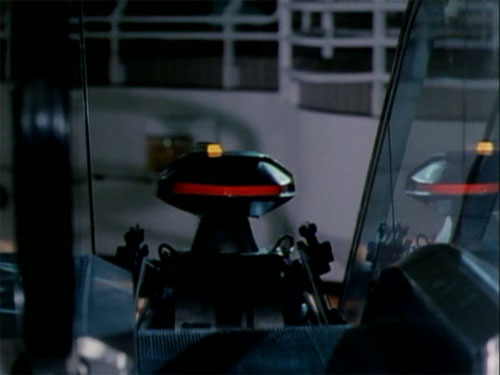 Zackula: Now we see why America's malls are dying.

Dr. Thorpenstein: Between that and Dawn of the Dead, you're not safe inside OR outside the damn things.

Zackula: Chopping Mall was one of those quintessential 1980s horror movies that capitalized on two of America's greatest fears: the fascist authority of mall security and teenagers hiding in stores after they close.

Dr. Thorpenstein: I can dig that, but one thing that I'm not seeing a lot of in this clip is actual chopping. Do you recall these robots doing any chopping?

Zackula: Oh yeah, they had a blade attachment that was sort of like a blender hand without the glass part. Teenagers: will they blend? Don't inhale that smoke!

Dr. Thorpenstein: That seems a little redundant when they have a head-exploder beam, but then again I'm no mall security expert.

Zackula: Yeah, it was quite an escalation in response and it didn't really address a problem. At least with something like ED-209 the counter argument was, "Hey, it's Detroit, it had the murder-bots coming."

Dr. Thorpenstein: Speaking of escalation, I think a way scarier horror movie to set in a mall would be one about an escalator that kills an unusually high number of people.

Dr. Thorpenstein: Like, we all know escalators are going to kill ten or twelve people per mall per year, but what if it was double that? Or even triple? 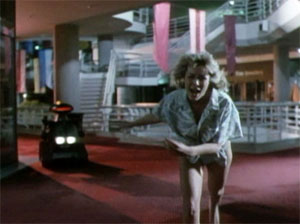 Zackula: Oh man, I saw one of those "I shouldn't have survived" type shows where one of those giant stadium escalators broke and was shooting people into an exposed gears meat grinder at the bottom. It was a bloodbath. I wanted to call my mom and shout at her "SEE! Tantrum at Macy's, age 8, JUSTIFIED."

Zackula: But then I remembered my mom was dead.

Zackula: So moral of the story, kids, hug your mothers, before the escalator hugs her for you in its flesh-pulping embrace.

Dr. Thorpenstein: My mom actually has a pretty strong fear of escalators, but only down escalators. And I can totally see where she's coming from, because you're essentially risking your life every time you get near one of those things. You probably only have to take one or two little metal grates off an escalator before you can start using it on a farm to mulch up chickens into dog food.

Zackula: If you peel off the manufacturer label it reads HORSE RENDERING CONVEYOR.

Dr. Thorpenstein: Every escalator company doubles as an industrial horse shredding company, and you just know they screw up the order and send the wrong one to the mall once in a while.

Zackula: "Well at least now we know it can also render down strollers."

Dr. Thorpenstein: Like sixty kids have to die before the mall managers start going, "Is it my imagination, or is this escalator killing like three times as many kids as usual?"

Zackula: "And why does it keep filling these tubs with paste?"