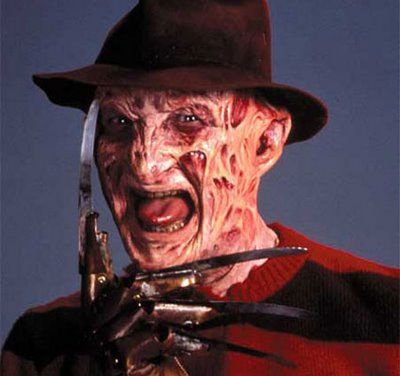 Zackula: Does anyone out there remember why Freddie did what he did or any of his story? I watched approximately eight Nightmare on Elm Street movies and vividly remember all the hilarious death scenes but all I can recall of the story is that he was a custodian.

Dr. Thorpenstein: If I recall correctly, Freddie was some kind of pedophile who got burned alive by angry townsfolk, and then he decided to get all his aggression out in the afterlife by making filmmakers spend way too much money on expensive comical nightmare sequences.

Zackula: I guess it doesn't matter, so long as Stan Winston could create his gross-out version of The Muppet Show. 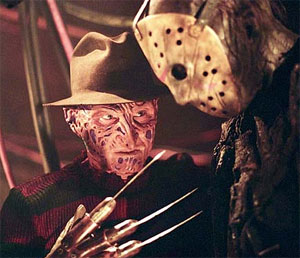 Dr. Thorpenstein: Jason was a much more economical killing machine; you just have to rent out a summer camp in the off season and film a couple of teenagers getting stabbed with hooks and stuff.

Zackula: Yeah, Camp Crystal Lake sunk their effects budget into topless scenes. Although Jason was a poor replacement for Italian breast-stabbing films.Those Italians really know how to stab up a titty.

Dr. Thorpenstein: Give me Lucio Fulci any day, he can get eighty titties stabbed for the price of a single Freddy dream visit. And they'll all look real, too. So real that one begins to wonder just how cheap life is over in Europe.

Zackula: Sometimes a man needs a little more than a workmanly boob-stabbing. He wants to be transported, taken away from his humdrum life to a realm of fantasy where heads squirm on pizzas and Johnny Depp is turned into a spewing column of blood.

Dr. Thorpenstein: I kind of miss ridiculous horror movies with a budget that weren't about little Japanese ghosts crawling on ceilings, or people walking up to someone really slowly and tapping their shoulder and then they turn around and something scary happens or doesn't happen.

Zackula: Everything is blue and there is always a magical little kid involved and you can pretty much guarantee nobody will be shredded by an escalator.

Zackula: Not even a horse.