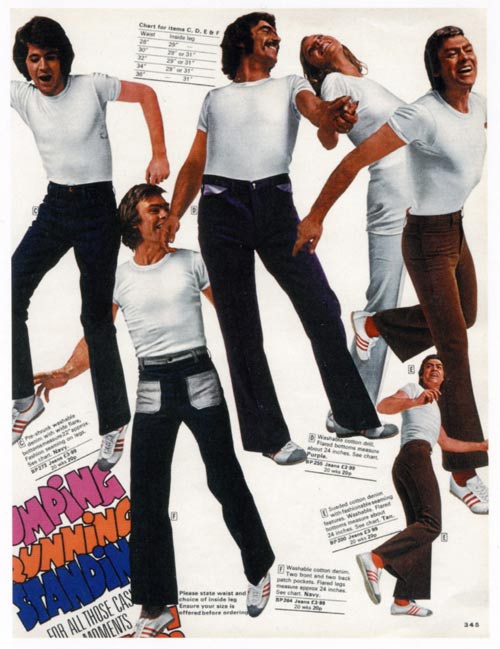 Zack: "The only jeans with a built in taser!"

Dr. Thorpe: The only guy who seems to be immune from their spastic effects is the guy who put them on backwards. He's still in sort of an alert stance just in case they go off, but as long as his genitals aren't getting electrocuted he can pretty much walk normally. He looks like he's kind of traipsing, maybe it's because they keep zapping him in the butt.

Zack: On the plus side they all seem pretty happy about their excruciatingly painful and uncontrolled muscle spasms. That guy on the right who is sort of lunging forward menacingly is so skinny that he looks like a genie emerging from a magic lamp. He will grant you three denim or corduroy related wishes.

Dr. Thorpe: They're happy because the pants simultaneously jolt you with 10,000 watts of electricity and administer a small dose of morphine. "Happy Zappys: The Pants that Live on the EDGE." They were invented to treat manic depression by overloading people with simultaneous pleasure and pain until their brain chemistry leveled out.

Zack: 1989 and some poor sap buys a pair of Happy Zappys at Goodwill, gets them home and the Pants Genie pops out in a cloud of Fabreeze.

Dr. Thorpe: He's probably one of those "WHO DARES DISTURB MY SLUMBER" assholes. Genies get like that if they have to live in failed novelty pants for too long. They get all bitter, and they love making your pants-related wishes backfire. "Pants genie, I just wish I had a really nice pair of pants that just fit well, you know?" And then the pants genie makes a pair of pants so comfortable that the owner becomes too accustomed to them, and when they wear out he is never satisfied by pants again.