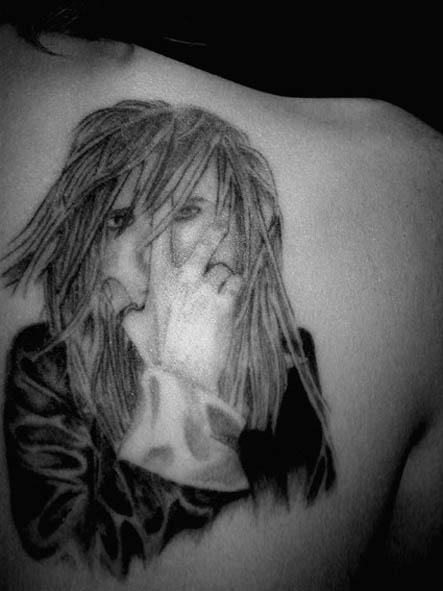 Zack: I think we should probably start off by telling everyone reading this that they're looking at a tattoo of Melissa Ethridge. Otherwise they will not believe what they are seeing.

Dr. Thorpe: Nothing tells me "I have nothing in common with you" like a big giant tattoo of Melissa Ethridge.

Zack: This person is just waiting to get their ass beat by Lou Diamond Phillips.

Dr. Thorpe: Wow, that's a pretty esoteric pop culture reference. We probably lost half the audience at Revolution X, are you sure they'll be able to follow us where we're about to go?

Zack: No story in rock history could be better than Melissa Ethridge stealing Lou Diamond Phillips' wife and then having David Crosby's baby with her. It is like a fucking Greek Tragedy that will be passed down for generations. If these kids don't want to be educated then they should stop reading now.

Dr. Thorpe: It's positively Shakespearian. David Crosby is pretty much exactly like Falstaff. Except, you know, without the wit.

Zack: He was possibly the best choice they could have made for a surrogate father for purposes of a dramatic narrative.

Dr. Thorpe: Okay, this is getting ridiculous. None of the same people who know what Revolution X is are going to know who Falstaff is. We've gone over the swingset, Zack.

Zack: If you go over fast enough you just come back around on a shorter chain. People NEED to care about this, Dr. Thorpe. David Crosby is possibly the biggest, fattest, most drugged up loser in music who managed to somehow survive the 60s and 70s and two lesbians chose him to provide genetic material for their child. They probably had to scrape his sample off of a sheet of blotter made out of a zoo animals puzzle.

Dr. Thorpe: Why would you choose the man with possibly the worst genetics in the history of music to be your child's father? Not only is he passing on fat, oafish, lazy, addiction-prone genes, he was like the least essential member of The Byrds and definitely the second least essential member of Crosby, Stills and Nash (next to Graham Nash who can basically go to hell for all I care).

Zack: Imagine Melissa Ethridge going up to Lou Diamond Phillips' wife at a party when he is in the bathroom and saying "I want to have David Crosby's baby with you." Now that's a pickup line. She would want to hear more just because the opener is so insane.

Dr. Thorpe: He's not even just mediocre, he's mediocre and disgusting. What was wrong with Tom Petty or Jackson Browne or Neil Young or the guy from ELO? Were they all busy?

Zack: Joey Ramone would have produced a better-looking baby.

Dr. Thorpe: I bet Melissa came up to her girlfriend one day after they'd been together for a while and said "well, I've done it! I've got David Crosby's sperm sample!" And her girlfriend said "oh shit, you were serious? I thought that was just a joke. A joke in really, really poor taste."

Zack: The kid probably came out in the lesbian hospital with Crosby's droopy mustache slicked down by placenta.

Dr. Thorpe: I bet they're setting up a bail fund for him like some kids get college funds.

Zack: It's like Basketball recruiters scouting third graders. They've got a tentative date set for his arrival at Betty Ford.

Dr. Thorpe: You have to wonder if they just chose Crosby to be audacious. Or maybe it's some kind of long-term con scam. It's such a slap in the face of common sense that you immediately start working out all the angles. Maybe they had inside information that Crosby is secretly the richest musician in America thanks to careful investing of his Byrds money, and they figured out the insemination thing as some kind of ingenious plot to bilk him out of his nest-egg.

Zack: Yeah, only the truth is probably way more sinister than we could imagine. Like it's part of some century-spanning music industry breeding program to create the chosen one. This same program explains Michael Jackson's Aryan children who wear bags over their heads all the time.

Dr. Thorpe: Yeah, it can't be a money thing. That scam would never get off the ground, because they'd instantly have to take into account that Crosby is such a disgusting loser that everyone in the world would be immediately suspicious of their motivations.