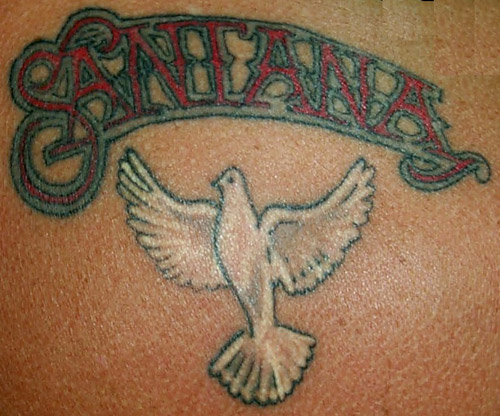 Zack: That's the kind of tan you get from browning next to a hot one-hitter. Just roll it around on your arms and back and you'll crinkle up like bacon.

Dr. Thorpe: That looks like the kind of tan you get when you walk around with your shirt off asking people for spare change for about thirty years straight.

Zack: On his other shoulder this guy has an Esteban tattoo. So really we're seeing the good one.

Dr. Thorpe: Now is probably the least cool time in history to have a Santana tattoo though. That awful comeback with Rob Thomas and Everlast isn't even fresh anymore. This tattoo is double-outdated.

Zack: Man, I hate Carlos Santana. If a guy keeps doing noodly modestly ethnic guitar numbers with my least favorite pop stars chances are he is the next Hitler. At least the next Aerosmith.

Dr. Thorpe: Say what you will about Santana, compare him with Hitler or whatever, but give the guy a break: he's not Aerosmith. He's not picking up rejected Celine Dion ballads and making lewd advances toward his own daughter yet.

Zack: To be fair to Steve Tyler his daughter is Liv Tyler. Inanimate objects make lewd advances toward her.

Dr. Thorpe: She and an inanimate object would make a good couple, judging by what I've seen of her acting. She has the screen presence of an attractive lamp.

Zack: You obviously didn't see her in "Stealing Beauty" she was amazingly naked in that. Actually, fuck being fair. I don't know why anyone would want to be fair to Steven Tyler after Revolution X.

Dr. Thorpe: I played Revolution X with Reid "Frolixo" Pzwerkzitz in Las Vegas, and the emotional scars it inflicted on me are more disgusting than a thousand Santana tattoos.

Zack: "DON'T GIVE UP!" Honestly though, if you're going to do anything with Aerosmith CDs shooting them at a bunch of fascist commandos is probably near the top of the list.

Dr. Thorpe: That game is pretty much exactly like a bad dream. It follows the most bizarre, perverted dream logic ever. The guy who came up with the concept must have woken up thinking he had the best idea ever, and then scrawled it on a notepad and found it the next morning. "What? Killing a thousand identical bad guys with Aerosmith CDs? Well, it seemed like a rad idea when I was half asleep, so there must be some merit to it."

Zack: When he took it to Steven Tyler I'm sure he got to the word "margins" and Tyler was plugging in the mic.

Dr. Thorpe: I bet Steven Tyler's exact words were "sounds great, but then again I will do literally anything for money."

Zack: Then Steven Tyler tried to get the guy to bet him a hundred dollars that he couldn't swallow an entire cake, but no one is falling for that old scam anymore.