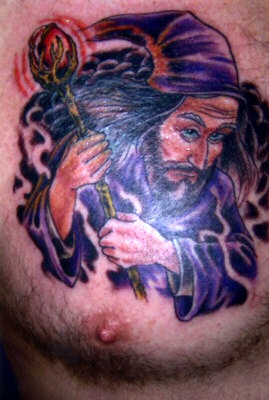 Dr. Thorpe: That wizard looks incredibly ashamed to be there. He looks like a really skittish dog that's just been hit in the nose with a rolled-up newspaper.

Zack: This guy is so dead in prison unless he can convince the Latin Kings that he belongs to a street gang called the Hebrew Wizards. That might cause more problems with the Aryan Nation, though.

Dr. Thorpe: I think the wizard is embarrassed that we just walked in on him while he was sitting on some fat nerd's big hairy tit.

Zack: I like how even the guy's boob has a beard. That's sweet. By "like" I mean that I enjoy medical oddities and wolfman grotesques.

Dr. Thorpe: Even better: it has a neckbeard. Even the guy's boob is a big old nerd.

Zack: I guess if you are he-of-bearded-breast you might as well try to draw attention away from that with a fucking awesome wizard. Too bad he couldn't get an awesome wizard. Even this wizard's staff is stupid. It looks like a giant baby rattle and has the motion lines like he's shaking it.

Dr. Thorpe: I can't get over what a pathetic coward that wizard is. He's all hang-dog, and those lines around the head of his scepter make it look like he's trembling. I think that wizard is cowering. "This cowering wizard represents the impotence and shame I feel every day."

Zack: Maybe this dude is standing in front of some topless woman with a really scary dragon on her boobs. Haha, what am I thinking? This guy wouldn't be in front of anything other than a computer screen.

Dr. Thorpe: Well, what are the odds that the screen he's in front of doesn't have boobs and dragons on it? Pretty slim.

Dr. Thorpe: I bet if you hooked electrodes up to this guy's brain and monitored his mental activity, you could run through a whole lot of words like "girlfriend" and "party" and "promotion" and you wouldn't get even a hint of activity until you got around to "leveling up"

Zack: Definitely. An inkblot test would result in an encyclopedic list of the monsters appearing in World of Warcraft.

Dr. Thorpe: I wonder if this guy got a noble and powerful on his boob back in 1985 when he was a young Dungeons and Dragons player with his whole life ahead of him, and then as he got older and fatter and hairier and wizard kept looking more and more ashamed of itself.

Zack: That's a nice idea but honestly I'm surprised this guy could tear himself away from the computer and endure the pain of socializing long enough to get one tattoo. Getting it done over and over is almost...unless...what if the wizard really is a wizard? Perhaps cursed to be trapped as a tattoo on this guy's chest? I mean honestly, what fate could a powerful conjurer fear more than imprisonment in the unholy breastbeard.

Dr. Thorpe: We have to move on, I'm only just barely swallowing back a good long cry on that wizard's behalf.