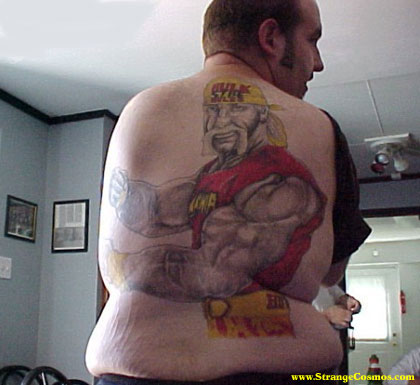 Zack: Waddya gonna do when Hulkamania leaves stretch marks on you?! I love the way Hulkster folds in at the waist along the guy's fat crease making him look waspishly skinny.

Dr. Thorpe: It looks like a junior high schooler from 1985 attacked this poor guy with felt pens.

Zack: Yeah, it is a pretty crude rendering of Hogan to cover your back with. His fist is like half the size of his wrist and his mustache looks like a melon rind.

Dr. Thorpe: Well, think of it from the perspective of the tattoo artist. If someone came in and asked for a huge portrait of Hulk Hogan on their back, your first thought would be "okay, I can half-ass this one, he obviously doesn't give a shit about what he looks like or how people perceive him anyway."

Zack: "8th grade education, so he probably won't even notice it looks horrible. No concept of how the legal system works so he can't sue me. He obviously has no sense of shame so he's not going to get embarrassed when people shout insults at him on the beach."

Dr. Thorpe: And he was totally correct, too. This guy is pleased as punch with his big, stupid Hulkster hack-job.

Zack: The guy looks like he's in a radio station's green room. I wonder if he's waiting to get on Keith and Kyle's Morning Drive Disaster to compete for a thousand dollar gift certificate at the laser removal clinic. Even though it's hopeless because some stripper named Peaches with a clover on her ankle is going to win because she came in a thong.

Dr. Thorpe: Next time some wide-eyed foreign kid with dreams of liberty in his eyes asks me what it's like to live in America, I'm going to use this image to permanently shatter his illusions.

Zack: "Hong Phan, you've got big dreams about liberty and equality. Picket fences and apple pie. That's not real. The real America is getting a cartoonishly bad full-back tattoo of a has-been professional sports entertainer that spreads out and distorts as you grow inexorably fatter."

Dr. Thorpe: "And if you keep hanging out with a nerd like me, not only am I going to introduce you to deep-fried foods and hours of desensitizing and soul-killing pornography, television, and action movies, but I'm basically only going to keep you around so I can make you say 'strong bridge, Dr. Jones!' over and over again until it gets old or I have a stroke."

Zack: "And the real kicker is...okay, my arm just went numb. Do you know how to use a telephone?"

Zack: The swing just flipped again. Let's move on before we lose any more of our paying customers.