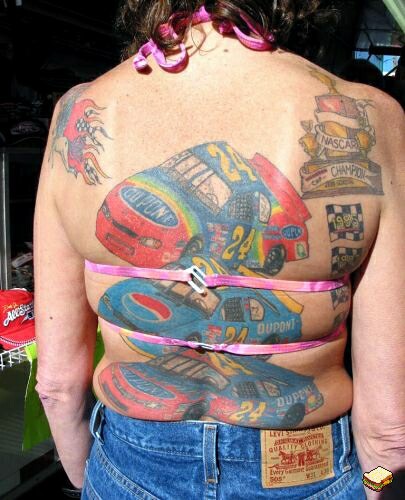 Zack: This image is entitled "Reflections in a Disturbed Pond."

Dr. Thorpe: This, Zack, is how the other half lives. Or, more accurately, the other 7/10ths.

Zack: I know, it could not be more alien to me. Those African tribesmen who put pipes through their lower lips are more comprehensible. So many decisions I would never make have resulted in this woman posing for this picture.

Dr. Thorpe: Culminating in the ultimate and worst decision: taking the photo.

Zack: Bad taste can be forgiven, recording it for posterity cannot be.

Zack: I love how her straps are absolutely strained to the breaking point. Look at that, they look like Stallone in "Cliffhanger."

Dr. Thorpe: Yeah, those clasps have gone fully diagonal. They're taking advantage of every millimeter of slack.

Zack: Don't give up straps! The consequences of you letting go are way worse than Janine Turner falling to her death!

Dr. Thorpe: Is there anything in the world less worthy of adulation and devotion than a race car driver?

Zack: At least race car drivers risk death. The worst he ever risked was being the target of a vaguely scathing comic in the New Yorker.

Zack: No but by risking death they open themselves up to the possibility of dying. And that, my friend, is a very admirable trait in NASCAR.

Dr. Thorpe: Ugh, have you ever been to the South? Nobody will shut up about Dale Earnhardt. That was their 9/11.

Zack: Oh, I know, it was a defining moment for the Midwest and South. That tragic moment when the Intimidator intimidated the shit out of a wall. Right now he is bullying the big wall in the sky. We love you, Dale.

Dr. Thorpe: They talk about it in the same breath as the World Trade Center blowing up as if the two were not only somehow linked but maybe even had some causal relationship.

Zack: I think the Delfer Report did say that Saddam had it in for Earnhardt.

Dr. Thorpe: He's the Tupac of white America. At least he's not still regularly doing races ten years after his death though.

Zack: Yeah, but he has a son who is still racing and I think he took on all his father's sponsors so it's pretty much the same thing. Tupac is still churning out remixes and Home Depot advertisements are still flying around the track at 150 miles an hour. I'll probably get emails from people complaining that I got his sponsor wrong.

Dr. Thorpe: This is another one to show Hong Phan.

Zack: I think this is THE one to show Hong Phan. Anyone can laugh at wrestling and enjoy that but only the direst of Americans can love NASCAR enough to get a triple tattoo.

Dr. Thorpe: "Kid, this is your future wife. She's going to love you because you own a liquor store and work 80 hours a week and make plenty of money and never come home, so she can buy a bigger TV ever year and regularly fuck the meth-addicted neighbor who looks a little bit like Jeff Gordon if she squints her eyes."

Zack: "Do you know what a zirconium is? Well you better figure it out fast Hong Phan, because your wife is going to figure out how to get about 250,000 dollars worth of them through the TV."

Dr. Thorpe: "And kid, you bought her that stupid top and those stupid tattoos. No, you don't have to give her money. She has a credit card, and she spends 120% of your earnings before they ever hit the bank, and if you don't indulge her taste for lava lamps and NASCAR bumper stickers, she's going to take it out on the kids."

Zack: "Do you know what Hepatitis is, Hong Phan? Oh, you will! A is in the water and C in the wife."