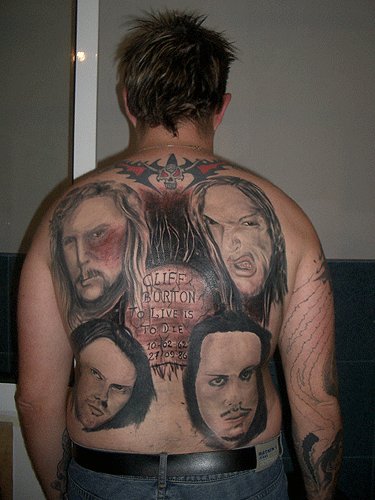 Zack: Man, James Hetfield has one hell of a shiner. It looks like he took one in the face at the batting cage. Maybe this tattoo originally had Cliff Burton's face and this dude is going around killing members of Metallica so he can replace their tattoo with a tombstone. I think there was an episode of The Twilight Zone like that.

Dr. Thorpe: I think I automatically hate anyone who likes Metallica enough to get this tattoo. I don't care if he spends all his free time working his ass off and direct-depositing his paychecks in my bank account. I don't care if he's the only one testifying on my behalf when I've been falsely accused of murder. I don't care if he comes over and installs mink siding on my house for free. He's still going to be my enemy.

Zack: Think about my scenario though. This tattoo is like a list of who he is going to kill. He HATES Metallica and they're going to pay for some vague injustice in the past. Like Loaded and Reloaded.

Dr. Thorpe: I guess that makes it a little better, but a twisted obsession with Metallica is still too much involvement with Metallica for me to swallow.

Zack: I'm not suggesting we be this guy's friend. But we can certainly respect his brand of dementia. More people need to develop mental illnesses that cause them to stalk and kill Metallica.

Dr. Thorpe: I wouldn't call that an illness, exactly.

Dr. Thorpe: I think not wanting to kill Metallica could be considered a personality quirk.

Zack:Well sure, who doesn't want to slice Lars Ulrich in half with a sickle? But fantasizing about it is one thing, devoting your life and most of the skin on your back to your crusade against Metallica goes beyond healthy hatred of Metallica.

Dr. Thorpe: Caller: "I met this girl, she's okay I guess... I mean, she's pretty great, but she doesn't have any desire to kill Metallica. She doesn't like them or anything, she just doesn't want to kill them."

Dr. Thorpe: No, Adam's not here, he's taking his fortieth piss of the night.

Zack: Is that what they're calling his show on Comedy Central? My TV did seem to emit the stench of ammonia when the Daily Show ended.

Dr. Thorpe: That might be the chip installed in your TV by the evil cabal of conservatives who run the nation that releases chlorine gas into the air whenever anyone watches the Daily Show.