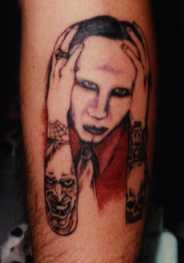 Zack: If only Marilyn Manson had a tattoo of some other guy with tattoos on his arm it would be like turning the video camera towards the TV at Circuit City.

Dr. Thorpe: Marilyn looks like he's got a huge headache just thinking about the Escher-like complexity of the notion.

Zack: Marilyn Manson is sad about being a tattoo but his tattoo is laughing about it. "Now you know how it feels, asshole!"

Dr. Thorpe: I think Marilyn is squeezing his head to try to pop out the giant dent in his forehead.

Zack: It almost looks like someone else is holding Marilyn Manson's severed head.

Dr. Thorpe: The great thing about having a tattoo of a face is that on Halloween you can get a sharpie and draw a mustache and a hat on it, but something tells me the guy with the Marilyn Manson tattoo isn't capable of the kind of abstract thought that leads to great ideas like that.

Zack: Yeah, Marilyn Manson always struck me as having a sense of humor but man his fans are invariably humorless. They probably go as a dead body every single Halloween and then pretend to be hallucinating on a shot of Pernod they poured over a sugarcube.

Dr. Thorpe: He's just wondering if it's possible to go to the tattoo parlor and get it altered to look like the singer from My Chemical Romance so he can pick up this year's batch of high school girls at the mall.