Behind the Scenes: Uwe Boll and Uwe Boll's Alone In the Dark

I AGREE BUT WE STILL NEED A BUILDING UP TENSE /SHOWDOWN OR WHATEVER. WHATEVER IT IS: EDWARD FNDS IN THE END SOMETHING WHAT BLOWS THE AUDIENCE AWAY, OR THE PROBLEM IS THAT MORE AND MORE PEOPLE ARE MISSING, MORE CREATURES OR BIGGER CREATURES ARE COMING UP ... ! We WANNA MAKE A UNUSUAL AND GOOD MOVIE - BUT DONT FORGET THE CLASSICAL - MUST'S - OF STORYTELLING 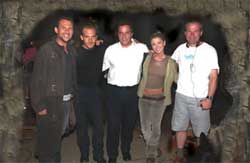 Boll and a team of archeologists search for his career in this cave.

By this point is was clear we weren't writing a true Uwe Boll movie, so the good doctor began to lecture us, the writers, on proper story telling procedure.

The story doesn’t go from A to B, which is unavoidable for a genre-flick. Your story is an author’s piece, a drama, where we spend time with people!!! With a video game adaptation what is more important than ever: hero needs to have a goal, that the [Uwe here uses the term “08/15 Zuschauer” which basically means the no-name, loser audience] understands and the hero needs to be interesting.

There was only one way to fix it and, fortunately, he had just the plan:

EITHER increasing numbers of people are getting kidnapped or killed by monsters, so that everything is threatened to go out of control and Edward has to stop the monsters – otherwise everything is lost in the end – OR Edward has to solve a specific case and stays on it – needs to go on an island (see ALONE IN THE DARK 4) or solve a murder. I was really angry, because I don’t think, that you’d ignore so many things, that apply to story telling basics!

Oh no! Our script had made Uwe Boll angry! I have to say that being lectured by Dr. Uwe Boll on the proper way to tell a story is an experience I will truly cherish forever. In our defense, I apparently skipped the film writing class which explained how every realistic, suspenseful script required at least one major scene on an island, unaware this omission would be a violation of "story telling basics." At this point we realized Boll was a world class fuck up and was only going to ruin anything he touched. Despite being desperate first time screenwriters, we walked away from the project and refused to give him the rights to our script.

For those of you who actually give a shit, the original script took the "Alone In the Dark" premise and depicted it as if it was a actually based on a true story of a private investigator in the northeastern U.S. whose missing persons cases begin to uncover a disturbing paranormal secret. It was told through the eyes of a writer following Edward Carnby and his co-worker for a novel, and depicted them as real-life blue-collar folks who never expected to find hideous beings waiting for them in the dark. We tried to stick close to the H.P. Lovecraft style and the low-tech nature of the original game, always keeping the horror in the shadows so you never saw what was coming for them. Thankfully Dr.Boll was able to hire his loyal team of hacks to crank out something much better than our crappy story and add in all sorts of terrifying horror movie essentials like opening gateways to alternate dimensions, bimbo blonde archaeologists, sex scenes, mad scientists, slimy dog monsters, special army forces designed to battle slimy CG dog monsters, Tara Reid, "Matrix" slow-motion gun battles, and car chases. Oh yeah, and a ten-minute opening back story scroll read aloud to the illiterate audience, the only people able to successfully miss all the negative reviews. I mean hell, Boll knows that's where the real scares lie.

He even managed to cast "Blade" actor Stephen Dorff in the movie. I'm sure he was a huge fan of his performance in "Backbeat" or something. The funny part is, after we walked off and he got his usual team of hacks to churn out a huge steaming pile of shit, he came back months later and asked us if he could get the rights to use scenes from our screenplay... for free. Oh, Uwe.

But the future is bright for Dr. Boll. Even though "Alone in the Dark" opened to #14 and made only $2.5 million on its opening weekend, as he's got plenty of other important film projects waiting in the wings. He's already finished shooting "Bloodrayne" and is working his way onto "Hunter: The Reckoning" and "Far Cry" next year. Notice a theme here? I mean, besides the whole "making terrible movies that nobody likes" thing?

For my part I would just like to apologize to the video gamers of the world for indirectly helping this man unleash another cinematic atomic bomb on audiences. In my defense I can claim at the time I started, I didn't quite know who Uwe Boll really was... and in the end, we did manage to salvage our script from actually being filmed at the hands of the mad doctor. So I can take small comfort in a quote by one movie critic this weekend: "The other practitioners of cinematic drivel can rest a little easier now; they can walk in the daylight with their heads held high, a smile on their lips and a song in their heart. 'It's okay,' they'll tell themselves. 'I didn't make Alone in the Dark'."