1:12am - I logged back into the game and noticed that the cleaning robot was gone, replaced by some woman was sitting down near the transporter / translocator / transformer / transvestite device. I began talking to her as if she was a cleaning robot, hoping that the robot would get jealous and return.

ME: "Hello cleaning robot! Would you be interested in joining my party of roving Bureaucrats? We offer all the candy you can eat!"
HER: "what?"
ME: "Oh, I see I have your attention now! Please join my party so we can go outside and start gossiping about the director of OmniCorp, who I think is gay! Then you can clean my desk, as it's filthy."

She didn't reply, so I accused her of being the "worst cleaning robot in this history of cleaning robots" and claimed she had terrible programming. My attempts at winning her over were short-lived, as the game proceeded to crash.

1:15am - I returned to the fray. The cleaning robot had come back as well, so I ran over to it and began apologizing profusely. I admitted that I wasn't really interested in recruiting the sitting lady to my secretarial gang, as I was simply trying to make him jealous and group with me. No response. I asked if the cleaning robot was perhaps lagging and unable to read my messages, and if he too was routinely getting disconnected. He didn't answer me, so I assumed that he was lagged. I decided to take advantage of his poor connection by trying to make out with him. The game then crashed.

1:18am - Upon entering the game again, I noticed that there were a bunch of tiny robots with lights swarming around the place. I immediately hatched a plan and attempted to recruit them onto my team, promising revenge on "that stuck up cleaning robot and his 'holier-than-thou' attitude." I also offered a fabulous 401k plan. I didn't have a chance to get an answer, as the game crashed. 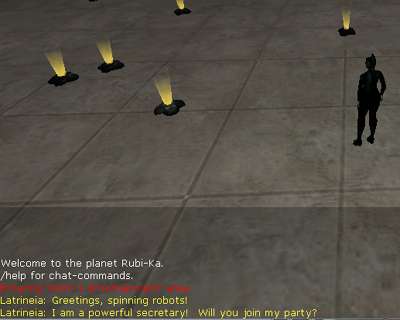 1:21am - I decided that there was obviously some bug in Anarchy Online keeping me from grouping with NPC cleaning and lighting robots. I ran up to a group of people and inquired if they had any success joining a team with cleaning robots or those dopey little robots with shiny lights. I asked if I possibly offended all robots with the bumper sticker on my HoverCycleFutureTechno eCar that reads "ROBOTS SUCK, HUMAN 4EVER." They didn't answer me, as they were too busy glowing and rotating around in circles. Then they ran away, possibly fleeing from my crash-inducing aura. True enough, the game crashed at that point.

1:25am - Logged in and realized that grouping probably wouldn't be the optimal strategy under current circumstances. Instead I tried to get free stuff from other players. However, not knowing the names of any good crap in the game, I was forced to bluff and shout something vague, hoping that the item would actually exist.

ME: "HAS ANYBODY SEEN MY FANCY HAT? I LOST IT WHEN THE SERVER KICKED ME OFF FOR THE 70TH TIME IN THE LAST NINE SECONDS. I WILL REWARD SOMEBODY WITH 50 CYBER NANO E-TECHNO CREDITS UPON RETRIEVAL OF MY FANCY HAT."

Sadly enough, there were no takers. At the risk of sounding like a fraud, I slightly specified my request.

ME: "I HAVE LOST MY FANCY HAT. HAS ANYBODY SEEN IT? IT HAS A FUCKLOAD OF PINK FEATHERS."

Before anybody could respond, the game died.