1:29am - I jumped right back into the game and began thinking that maybe FunCom doesn't like the Bureaucratic class, so they were making my game crash every other minute. I began petitioning to change my character into a brand new class, one which I assumed would be crash-free. 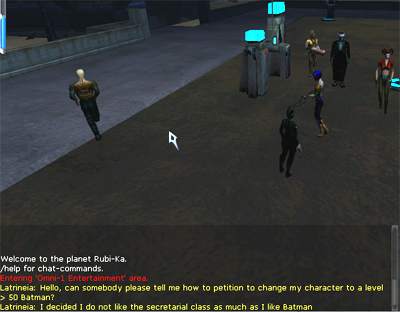 Everybody in the zone was either lagged or stupid because I didn't get any immediate offers to turn me into a level 50 Batman. I then once again tried to "sweeten the deal."

ME: "I WILL GIVE A FREE SoW TO ANYBODY WHO WILL CHANGE MY CHARACTER INTO A LEVEL 50 BATMAN."

Somebody tried to take me up on my offer for a free SoW but I told him to go fuck himself because he obviously didn't know how to make me level 50. Or Batman. I ran up to a large statue and accused it of being Batman in disguise. I think this made my game crash, because at that point my game crashed.

1:32am - I suddenly realized that my apartment in the game had no refrigerator! This worried me to an incredible extent, as most apartments these days come with refrigerators... and this game is supposed to be taking place in the FUTURE for God's sake! I saw some fat guy sitting down, and since fat people know a lot more about food than the rest of us, I started asking him if he thought my lack of refrigerator was a bug in the game. 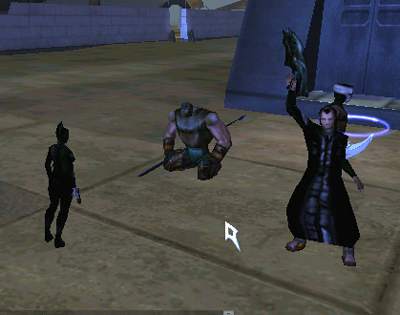 He claimed I needed to buy one. I told him he was "too fat for his own good," shortly before expressing how utterly batty it was to have an apartment without a refrigerator. I mean, if I try to put my collection of pimento olives in the fridge, and the fridge isn't there, they'll just fall to the ground and break! You'd think that somebody at FunCom would've considered this by now! The fat guy promptly disappeared and was replaced by a lump of fire for some reason. I didn't have time to figure out what exactly just happened there, as my game shrewdly elected to crash.

1:36am - I tried to group with a billboard advertisement of a large man. 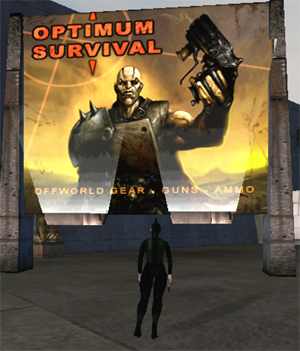 He turned me down, I guess. He also made my game crash, which wasn't really that surprising.