1:38am -I tried to group with the machine that dispenses missions. I assumed that since it knew of all the missions, it would be able to provide valuable information for my Anarchy Online journeys and allow me to get a leg up on all the other chumps. No response. A group of people were huddled around the machine, undoubtedly trying to persuade it to join their groups. I warned them all to stay the hell away from my machine, as it was off-limits to them and "their kind." 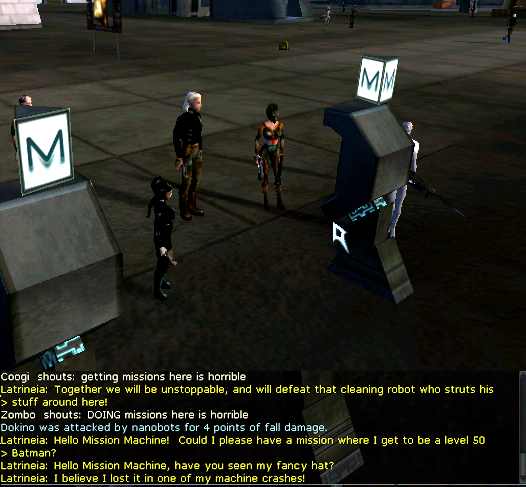 Some guy in a white shirt came by and started looking suspicious, so I scared him away by making duck noises. This resulted in the game crashing.

1:42am - I logged back in once again and began shouting that somebody stole my copy of Anarchy Online and replaced it with a defective impostor that crashes every minute. I ran up to a group of people who were talking about "server stability" and "routers" or some stupid shit and began demanding a refund from them. One of the people started doing something goofy with a couple sticks, so I told him to cut it out or else I'd write a very unflattering report about him to the OmniCorp Director of Jerks. I asked the group if they had seen Batman lately and if he could save me from game crashes (as I assumed only he could).

They continued talking about network problems. I claimed Batman stole my refrigerator and was in cahoots with the cleaning robots and the cleaning robot disguised as a human woman sitting down. Even though they didn't reply to me, I still advised them to "stay the hell away from those cleaning robots," as I figured they were making my game crash. As if on cue, the game crashed.

At that point I figured I did all I could do in one hour of ill-spent playing time. Perhaps one day FunCom will release a version of Anarchy Online that is playable and actually delivers the content that is promised by its creators. Until then, however, avoid the cleaning robots at all costs... and this game.