Sunday, May 20, 2001 by Rich "Lowtax" Kyanka
The staff behind Something Awful took a trip down to the giant mega-computer gaming conference, known to us mortals as "E3". This convention in Los Angeles celebrates the hottest and most exciting console and PC games to hit the market in the upcoming year (or decade in certain cases). It's a conference that promotes sex, violence, money, and all the glitz and glamour of an airplane crashing into a Las Vegas stripshow.

First up in the Activision booth was their eagerly anticipated title, Return to Wolfenstein's 3D Castle Part 2: Hitler's Revenge. The Nazi dominatrix lesbian vampire flamethrower zombie gamewhores from last year were gone, having been replaced by Allied Gamewhores who undoubtedly overthrew their secret headquarters under Colditz Castle where high tech breast implant technology was being researched. Unfortunately, their tit schematics must've been destroyed in the attack, as their breasts were not very large at all. This means that Wolfenstein 3D's Return to 3D Castle Wolfenstein 2 won't have very good gameplay, because as we all know, breast size is directly proportional to quality of the title. 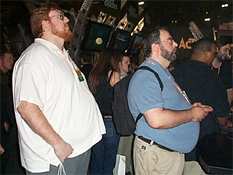 Greg Goodrich, one of the slackjawed yokels behind Redneck Rampage and the indigestible Kingpin, was demoing off Castle Wolfenstein 3D Returns: I Choose You to crowds of testosterone-dripping males who love nothing better than to shoot pixelated Germans. The current build of the game really surprised me, as I assumed Activision would've forced the entire Gray Matter Studios team to get rid of all the Nazis and instead replace them completely with zombies. You see, Activision likes zombies. They REALLY like zombies. Activision knows that zombies and dead things sell games, so they attempt to cram as much hot and steamy zombie-on-zombie action as possible into every game. I can imagine what meetings inside Activision must be like... 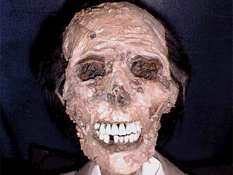 So it was relatively surprising to see that Activision allowed the Gray Matter team to keep a shred of the Nazi motif instead of replacing everything with "running away from dead things." Greg was attempting to show off the game to a few interested onlookers, but I wasn't really making his job very easy. As everybody out there knows, I am one of the only true video game reporters left in the industry. All the self-professed "gaming news sites" are afraid to ask the tough questions, under fear that the developer will stop speaking to them and they'll lose all exclusive scoops. They don't dare get the developer angry because their entire site depends on milking as much new information from them as they can. Not Something Awful though! We're "fresh and in your face," ready to "tell it like it is" and "drop that zero and get a hero!" I immediately launched into a Return to 3D Part 2 Wolfenstein's Castle interrogation, taking no prisoners and insuring that this was one demo session Greg wouldn't be able to skate through. You know, because he was sitting down and wouldn't be able to skate.

GREG: "Watch this. You can shoot up this wall and the bricks fall down and there's gold behind it!"
ME: "What do you do with the gold?"
GREG: "They're treasure items."
ME: "No, that's not what I meant. What do you DO with them? What does having more gold do?"
GREG: "Well, uh, it, uh, gives you more treasure points. Um, I mean items."
ME: "Who the hell cares about that? Can you melt the gold bars down and make a golden gun that shoots golden bullets or something?"
GREG: (Ignoring me and moving on) "Now on this part, watch the reaction of the Nazi soldier as I shoot his buddy."
ME: "What are the Nazi's reactions to you stealing their cleverly hidden gold? Maybe you could just throw the gold bars at the Nazis. Or hand-to-hand gold bar combat in a bonus round. Or the gold bars could be full of chocolate and they heal you up."
GREG: (Moving on) "Now the zombies under the floor below me are attacking the Nazi soldiers."
ME: "Are those normal zombies or Nazi zombies?"
GREG: "Normal zombies."
ME: "How do they feel about gold bars?"
GREG: (Continuing) "Notice how the zombies duck behind their shields to protect themselves from your attacks."
ME: "Where the hell did they get their shields from? Or those axes? Were they buried with them? Are they made OUT OF GOLD?!?"

Castle 3D's Wolfenstein Revenge 9 did look pretty spiffy, assuming the Gray Matter team can find some way to break up the nonstop "grey stone / wooden floor" motif that appears to be in every level. Yes, I'm aware that the Nazis enjoyed building things out of stone and wood, but if Activision can cram 500 tons of zombies into a game that originally had nothing to do with zombies, then I assume they can do the same with level design. Maybe the Nazis could live in an orbiting space station. A space station with a BIG GRAVEYARD. That should sweeten the deal for Activision.