Jerry Falwell passed away Tuesday, bringing to a close the story of a man who has uplifted our nation for over 50 years. Falwell was known as a man of faith and strong convictions, often running afoul of various women's groups, homosexual groups, and other groups representing malcontents and subversives in the United States. While this controversy may linger, Falwell's message and his legacy are of peace and understanding.

Many biographies have been and will be written about Jerry Falwell. Attempts will be made to understand and distill this wise and righteous man into descriptive paragraphs. On this third day of national mourning, let us not stoop to such crude biographies. Instead, let us celebrate the man in his own words. Let us take a journey through the inspirational statements and musings of Jerry Falwell. 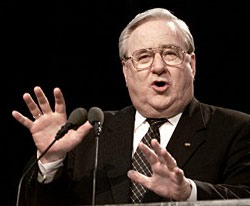 "God is real and tangible. His strength resides within me." - To a symposium on Christianity after tearing a 900lb steel beam in half. (1987)

"When we pray, God listens. If God wills it then it is so. Connect the two and you will realize that anything is possible." - To a class of third graders as he hovered in midair and made clocks turn backwards. (1991)

"No door or window is barred to the Lord." - Final comment at a press conference, followed immediately by Falwell phasing through a concrete wall. (1992)

"Death is not the destruction of the man, but the passage of what is human from the confines of the flesh. To think this process irreversible is to think God less than omnipotent." - Speech delivered from the back of a tank to his skeleton minions. (1994)

"An angel cannot be chained!" - Shouted as he smashed through the walls of a Justice Force holding cell. (1995)

"God's Plan is not limited by our flawed human perception. More power to the Crucible!" - To his henchmen in the Moral Majority Tower as he used the Crucible device to open a rift to the 9th dimension, unleashing smoke-like aliens called "Ravenors". After realizing the Ravenors could not be controlled, Falwell joined forces with Captain Uranium and Darkbow from the Justice Force to defeat the Ravenors and close the rift. (2000)

"I like all races pretty much equally, but maybe I like Pacific Islanders just a tiny bit less than the rest. So sue me." - Closing arguments in the discrimination suit People of Polynesia v. Falwell. (1982)

"God has given each race of mankind a unique gift. The Asians are wise and magical, the white man commands machines, and the black has been given a surplus of bones allowing him to perform feats unmatched in athleticism." - Final comments at an NAACP fundraiser dinner. (1988)

"White, black, brown, yellow, or red, we're all made of flesh and blood and I think it is this meat nature that unifies us in our quest to eradicate the stone men." - Blessing given to the NATO troops before the commencement of Operation Rock Burner. (1993)

"The Jew is the stealthiest of races. There is no community he cannot infiltrate. Did you know just yesterday I saw a Jew break dancing? They are an amazing people." - At the Moral Majority's Jew of the Year gala during which Richard Lewis won for the second year in a row. (1995)