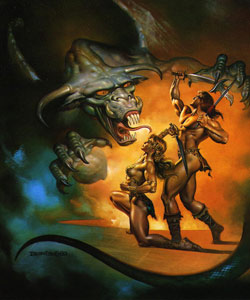 After detention let out, Ingmar and Dave returned back to Dave's house. Ingmar's spear wound was only superficial and slightly painful, but the barbarian seemed down in the dumps.

"I am glad we defeated the jocks and that you won the heart of Brooke Galloway," Ingmar said sadly as he set his book bag on the desk chair in Dave's room. "That is all good. But I fear that I have learned nothing that will help me fight the wizard. I am no closer to saving Arissaha."

Dave smiled and closed the door of his bedroom before his stupid mom could come in and bother them.

"Ingmar, buddy," he lifted his own book bag onto his bed, "I think I might have the solution to all of your problems."

Dave reached into the bag and pulled out a metallic object. He held it out to Ingmar.

"Courtesy of Terry Fitzpatrick," he said, "I think this will solve all of your problems."

"Is that the thunder machine he used?" Ingmar asked, reluctant to take the gun.

"Yes," Dave said, "I know it is not honorable and normally a true warrior would refuse to use such a thing."

"That is true," Ingmar nodded.

"But you are facing a wizard, with no honor, who will resort to kidnapping and deals with goblins to get what he wants."

"How did you know?!" Ingmar exclaimed.

"Believe me, I know about wizards," Dave said with a knowing smile.

"Then I must go," Ingmar took the gun. "I must save Arissaha."

Dave and Ingmar went into the backyard where the shimmering portal still hung above the crater. 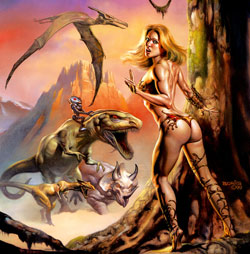 Ingmar gave his great and noble friend one last look and then leapt into the portal. With a flash of light and magic sounds he was gone and the portal disappeared behind him. Dave turned and walked back into the house, feeling a bit sad. As he walked back to his room the doorbell rang. He opened the door and was surprised to see Brooke Galloway. She was wearing see-through lingerie.

"Let's do it now!" She cried, throwing herself at Dave.

They went into the bedroom and Dave grabbed her boobs. They were big and soft and she had pointy nipples. She got on top and they started doing sex with the girl on top and it felt incredible.

"You are the best at sex I've ever had," she moaned as she bounced around on him.

"I know," Dave said and grabbed her boobs again causing her to orgasm.

"I'm going to orgasm even harder," she cried out and started kissing him.

"You are going to be orgasming all night long," Dave told her and started doing it even harder than before.

Ingmar finished smoking his cigar and put it out on the ashtray made out of a goblin skull. Arissaha was naked and asleep next to him after they got done having sex for two days straight. She was all sweaty and the sweat was going down her butt crack which Ingmar was admiring.

He got up from the bed and looked at the gun that had saved his people. It sat on a table next to the stuffed head of the evil wizard that had caused so much trouble for the Wulfgar and Ingmar in particular.

His eyes moved unconsciously over to the painting Arissaha had done with berry juices on animal hide. It was a good likeness he thought. It captured the strength and wisdom of the person depicted.

"I will always remember what you did for us," Ingmar said touching the frame of the picture. "Dave King of Centerville, your name will live on in my people for eons to come."