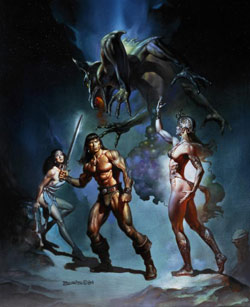 The next morning on the bus ride to school, Ingmar attracted some attention, particularly when he rammed his head through a window and howled into the wind. Dave was able to cover it up by explaining that he was a foreign exchange student from Australia.

"You have to calm down and act like everybody else," Dave whispered to him as they get off the bus at school.

"I cannot act like them, Dave," Ingmar said with a shake of his head. "I am Ingmar, Frost King of the Wulfgar. I am he who wears the ring of frost."

"That's great, Ingmar," Dave said, "but unless that ring of frost can get us out of detention you need to calm down."

First period was science class with Mrs. Brandt. After it was realized that Ingmar could not fit into a desk he was allowed to sit at the back of the class in a chair near Dave. Dave's friend Keith was also in that class.

"Who is that dude?" Keith whispered.

Dave looked at Ingmar who was sharpening a wooden ruler into a spear tip on the edge of his desk.

"Oh," Keith's brow furrowed for a moment and then he grinned, "awesome, dude. Is he playing D&D with us this weekend?"

"David Stamner!" Mrs. Brandt shouted. "Do you want a detention?"

"RAAAAR!" Ingmar roared and threw his chair across the room.

He kicked over a lab desk and then threw the sharpened blade of the ruler at the chalkboard only inches from Mrs. Brandt's head. It buried itself in the chalkboard and vibrated.

"No detention," Ingmar bellowed and threw another chair through a window for good measure.

Later, at lunch time, Dave, Ingmar, and Keith were sharing a table in the back of the lunchroom.

"This is incredible!" Ingmar exclaimed around a mouth full of food. "The crunch of baked pig skin, the salty flavor of cured fish, and the juicy meaty taste of a kidney pie. If I ever return to my home I must tell the villagers about this - what was the name you gave it?"

"Frito pie," Keith laughed. "It is awesome, but wait until Friday."

"What comes on this 'Friday' of which you speak?"

"Pizza day," Keith threw up devil horns on his hands and head banged really well for a couple seconds.

Dave was not enjoying himself though. Ingmar had attracted the attention of half of the school. Across the lunchroom Terry Fitzpatrick and half of the Centerville Spartans football team was looking in Ingmar's direction. At a table near them, Dave could see Brooke Galloway. She was wearing a really tight sweater so you could see the shape of her boobs and she had her hair in a pony tail.

Suddenly, Terry and several of his beefy friends stood up and started walking towards Dave's table. The only thing worse for Dave than getting his ass kicked by Terry Fitzpatrick would be if it happened in front of Brooke Galloway. It would take all of his karate training to defuse this situation.

"The jocks are coming over," Dave warned.

Ingmar let the food fall from his mouth and back onto the tray.

"If they beat me up in front of Brooke then I'll never have a shot with her," Dave began doing karate stretches. "I've got to take down Terry."

"No," Ingmar clapped a hand on Dave's shoulder. "You go to her. Tell her your inside feelings. I will handle these accursed 'jocks'."

"Dave," Ingmar looked at Dave, "you do not give her an alternative. Tell her that you are the only man she can have."

Keith stood up and backed away from the table. He always claimed he was a lover and not a fighter. Dave ran toward the table where Brooke was sitting with her friends, but his way was barred by Ike and Ben, two football players.

"Where are you going, nerd?" Ben asked.

"Through you if I have to," Dave assumed a perfect kung-wa stance. "You don't want to do this though, guys."

"He he he," laughed Ike and they attacked.

The spinning crane kick was flawless and it connected with Ike's head. He twisted around as he fell, out cold. Ben pummeled Dave in the midsection, but Dave had trained himself to feel no pain and he shrugged off the powerful punches.

"I am more human than you will ever be," Dave said before unleashing a flurry of knife chops on Ben's head and neck.

The big linebacker crumpled to the ground. 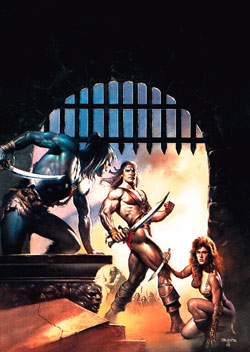 Meanwhile, the whole rest of the team was occupied with Ingmar. Ingmar lifted Dan Colby, the halfback, up over his head and then brought the player's spine down on his knee. It splintered with a crack and blood sprayed out of Dan Colby's mouth. Josh and Duayne attacked next with swords, but Ingmar deflected their blows with his lunch tray.

A powerful overhand swing from Duayne sliced through the thick plastic. Ingmar drove the two halves into the throats of the two players, sending them reeling back with blood spraying out of their necks.

Three linemen approached with morning stars swinging, but before they could get in range Ingmar lifted up a lunch table and swung it at them like a great ping pong paddle. It smashed the trio into the ceiling across the room, reducing their bodies to so much red guts and jelly.

"You're going to go out with me!" Dave shouted. "You're my girlfriend now!"

Her breasts heaved, even bigger up close.

"Do you hear me?" Her big blue eyes blinked twice and then she smiled.

"I love you!" She cried, throwing her arms around his shoulders.

She kissed Dave on the mouth and their tongues were moving around together in a big French kiss.

"I want to do sex with you too," she moaned.

"Not right now!" Dave said. "My friend is in jeopardy!"

He turned just in time to see Terry thrust a spear into Ingmar's side as Dale, the Spartans' center, was being torn in half by the huge barbarian. Ingmar dropped the lifeless ribbons of the football player and grabbed at the spear in his side.

"Curse you jocks," Ingmar bellowed, "you fight with dishonor."

"We may fight with dishonor," Terry sneered as he took a big revolver from his pocket and pointed it at Ingmar, "but we win."

Dave knew he only had one chance to save Ingmar. He gave Brooke a final squeeze on the soft butt cheek and then he began running at Terry. The hammer of the revolver cocked back as Terry pulled the trigger seemingly in slow motion. Dave ran faster than he ever had before. He jumped up on a chair, launched himself onto a table, and then leapt in a perfect flying dragon kick towards Terry.

Just as the quarterback finished pulling the trigger, Dave's shoe connected with the side of his head. All of the chi had been focused into Dave's toe by his training and martial-arts concentration. With a crackling burst of energy the chi left Dave's toe and went into Terry's head. The powerful energy instantly boiled Terry's brain and as Dave's kick continued moving forward the boiling brain softened the skull and Terry's whole head exploded.

The gun fired a split-second later, but by then Terry was already falling and the bullet harmlessly struck the ceiling. Dave landed flawlessly next to the smoldering body and looked at Ingmar with a smile.

"You are truly a great warrior," Ingmar said.

"DETENTION!" Vice Principal Washington shouted from across the lunchroom.