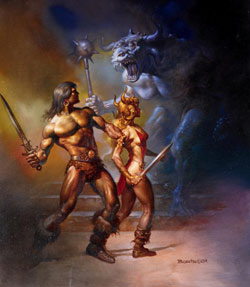 Dave paused from his karate practice to take a sip of his root beer. He was sweaty but it was invigorating to do karate moves in his bedroom. Dave turned the page in his karate book and looked at the picture of Sensei Paul doing the spinning crane kick. He pressed play on the tape again and heard Megadeth start playing and he started practicing the spinning crane kick. He focused on his poster of Beastmaster and the powerful muscles of Marc Singer. The spinning crane kick was difficult, but Dave was probably the best at karate in the whole town and he would have been the champion if there was a championship.

Dave executed a flawless spinning crane kick on his third attempt and there was a loud boom of an explosion. For a second he thought he might have kicked through the drywall again or maybe it was just his chi power exploding from his kick, but then he smelled smoke and looked out his window into the backyard.

Something had crash landed out there! Dave walked out to his kitchen and past his mom who was making strip steaks for dinner.

"NO!" Dave screamed and walked out into the backyard.

There was a crater near the old swing set and there was smoke coming up out of the crater. It looked like there was a meteorite or something in the crater. Dave approached it cautiously, his fist cocked back and ready to deliver a nerve punch. When he reached the edge of the smoldering crater he discovered not a meteorite but a man in a fetal position. A strange shimmering portal was in the air over his head. The man was very muscular and tanned.

"Are you okay?" Dave asked.

"BLAAAAARGH!" The man stood up suddenly and then fell out of the crater.

"It's alright," Dave said, "you crashed here in this crater."

"Where am I?" The man asked with a strange accent.

"You are in Centerville."

"Are you one of the wizard's henchmen?"

The accent reminded Dave of Arnold Schwarzenegger, which only added to the growing impression that this man was from the same place as Conan.

"Wizard?" Dave's mind flew to Elminster and other wizards like Gandalf and Merlin. "No, I'm not a wizard, I'm just a high school student."

"High…school?" The man looked up at the clouds.

"No," Dave laughed, "it's a school where I learn from books and have to play dodge ball."

"You are a man of great learning?" The muscle-bound man asked.

"My name…is Ingmar," the man said.

"Anyway, yeah, I'm pretty great at karate and I probably know more about Dungeons and Dragons than anyone in town."

"They're just in the game, they aren't real." 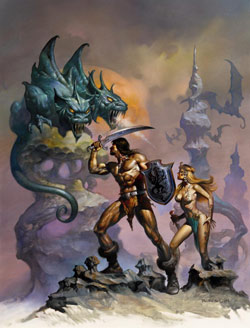 "Dragons are very real," the man nodded solemnly. "My grandfather was slain trying to defeat the Winter Wyrm and it took my father and ten other of the bravest warriors to best that creature."

"Well here in Centerville there are no dragons," Dave helped the man to his feet. "The closest thing we have are the stupid jocks on the football team like Terry Fitzpatrick."

"I hate them!" Ingmar declared.

"Me too, Ingmar," Dave patted the barbarian on one muscled arm, "me too."

Ingmar leaned weakly on Dave as they walked toward the house. Ingmar blinked at the ranch style dwelling and his eyes widened.

"Such a magnificent longhouse," Ingmar rasped, "you must be a king."

"Welcome to the 20th century, Ingmar," Dave said with a smile and brought the barbarian into the kitchen through the sliding glass door.

"SHUT UP, MOM, GOD!" Dave shouted at his embarrassing mother.

Later that night they sat around the dinner table eating strip steaks and mashed potatoes.

"Does your friend want a beer?" Dave's mom asked with a stupid look on her face.

"I am sorry," Ingmar said, "but I do not allow my mind to be clouded by alcohol or drugs."

"Exactly," said Dave, "it is stupid to drink alcohol and only losers do it."

"Yes, it is very important to maintain focus," Ingmar agreed, "you are very wise not to drink or do drugs. The only time we Wulfgar drink is when we sip the mushroom wine of the red rage before a battle to hone our bloodlust."

"Is that like a Cherry Pepsi?" Dave's mom asked idiotically, getting up from the table. "I think I've got a two liter-"

"Well, alright, I was just asking," Dave's mom sat back down stupidly with a dumb sigh.

"Dave," Ingmar began, "I must return to my time. I need knowledge of the sort that you have. Perhaps at this…high school…I can learn your ways and defeat the evil wizard."

"Oh, are you boys having a game tonight?" Dave's mom asked like a total idiot. "I don't know if I approve of having one of your overnight sleepover games on a school night."

"MOM!" Dave's frustration was growing by the second. "We're not talking about Dungeons and Dragons. This is real. Ingmar is a barbarian."

"Well," Dave's mom said thoughtlessly, "I suppose he can sleep over. I'll get out the sleeping bag from the camping box in the basement, but you boys need to keep it down. Your father has to get up for work in the morning."

"Huh?" Dave's dad looked up from the magazine he was reading. "Oh, yeah, keep it quiet or no more sleepovers."

"God!" Dave exclaimed and got up from the table.

"Your generosity is appreciated," Ingmar nodded his head and stood. "I must prepare myself for the ways of the high school tomorrow."

That night, Ingmar lay on the sleeping bag on the floor of Dave's room staring up at the ceiling.

"Her name is Arissaha and she is the fairest woman of the Wulfgar," Ingmar continued his tale, his voice thick with sleepiness. "Her hair is gold as the summer straw and she smells of mountain flowers."

"What about her boobs?" Dave asked.

"They are large and always nearly bursting from her shirts, like bread rising in the pan," Ingmar seemed distant and dreamy. "I fantasized about our wedding night and how I would tear the laces from her bodice, but always the work of leading the tribe came first."

"I know how that can be," Dave nodded, "I'm always working on the next adventure for the campaign with Keith and I never have time to focus on girls."

"But is there one who has your heart, Dave?"

Dave contemplated the question for a few seconds.

"Brooke Galloway," he said at last. "She is the hottest girl in my school. Her boobs are probably like twice as big as Arissaha's and she always wears really tight pants and skirts to school."

"Then you should have her," Ingmar said, "make her your bride."

"She's going out with Terry Fitzpatrick."

"He is the leader of these jocks you talk about?"

"Yeah, he's the quarterback of the football team."

"I hate them!" Ingmar pounded his fist into his hand.

Without another word between them, both warriors drifted off to sleep.