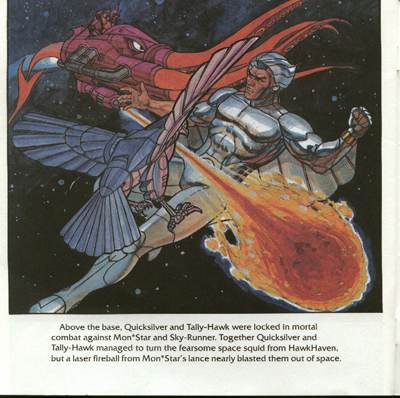 According to the book, Silverhawk and his spy bird Tally-Hawk engage in combat with Monstar and his Squidmobile. However, according to the picture, Silverhawk and Tally-Hawk are engaging in a little "recreation" of their own. I hate to imagine what the significance of a giant flaming ball means in this picture, so I think I'll just stop writing about this page entirely. In the future, bestiality is just fine. 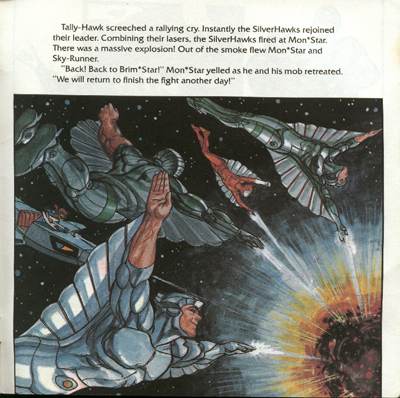 The entire Silverhawks team bands together and shoots their hand laser lens flares at Monstar, causing him and his Squidship to explode. However, out of the smoke (apparently there's smoke in space), Monstar and his Sky-Runner appear and retreat to fight another day. I'm not really sure what really exploded here, since both Monstar and his Squid Car ended up flying away unscathed. Windjammer probably realized he's the weakest link on Monstar's goon squad, and did the wise thing by rigging himself and his car to blow up. What did the guy have to live for anyway? He's got a face which looks like roadkill after it's been raped by Ron Jeremy, a superpower which is completely worthless in space, and he has to sit alone in his spaceshipcar because the other worthless villains won't even go near the guy. Do you blame him?