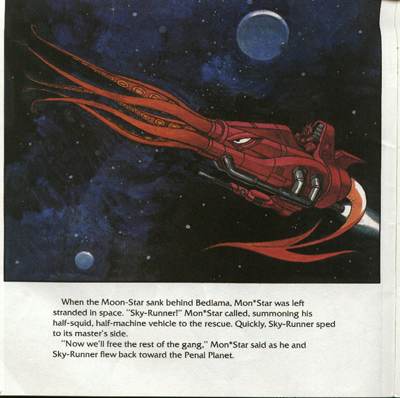 After becoming a bipedal hunk of metal with various glowing body parts, Mon*Star somehow becomes "stranded in space." I assume that once the wardens realized that when they purchased the "Prison Planet" from ACNE, they got severely screwed, as their planet seems to be missing roughly 600,000,000 cubic meters of land. But hey, it has that really boss satellite on top for when they want to pick up women's wrestling at 3:00 am.

Mon*Star (which I'm going to refer to as "Monstar" from now on because the alcohol in me is making a major chore out of finding the asterisk key) summons his "half-squid, half-machine vehicle" to rescue him. Now I'll be the first to admit I'm not one of those guys who studies stars and planets and that shit, what are they called, a urologist or whatever. I don't know nothing about no space. However, I'm fairly certain that space isn't known for its large and thriving squid population. I'll even go out on a limb here and claim that in all the space movies I've seen, never ONCE did a single squid appear. I've seen machines in space but never squid, which begs the following question: huh? If I was Monstar and sitting in the Evil Spaceship Dealership, you know what I'd do if the salesman suggests I purchase a vehicle which is composed of 50% squid? I would get my mad scientist to shoot the salesman with a gun that causes his testicles to fill up with thousands of tiny baby scorpions. Anybody who not only advocates vehicles made from sea creatures but also attempts to make me BUY one should suffer the worst death possible. I'd march into that dealership and say, "Half squid, half machine? Fuck that, how about ALL machine, you braindead yahoos?" 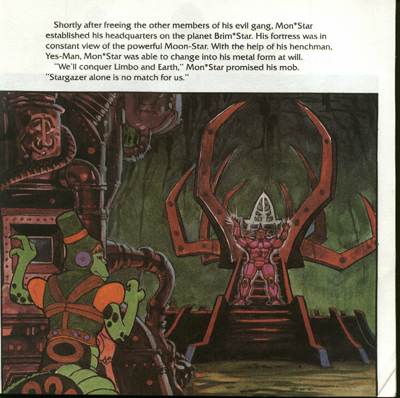 Monstar sets up shop in Brim*Star, which I will call "Brimstar" because I'm getting sick as hell of these stupid asterisks. They need to put to death whomever is responsible for advocating the "*" in every proper name. I bet it's the same guy who engineered the Squid Ship.

So Monstar begins his detailed and highly technical plans, which are as follows:

Cartoon bad guys never really need a way to get from point A to point B. As long as point B exists, that's all that matters. Monstar gets some kind of monkey / slug / Shriner to touch a square, allowing him the ability to transform between Rock and Roll Glam Man and "Walking Can Opener." This will undoubtedly come in handy when he's got to urinate and can't wait another 24 hours for the Moon Star to rise or fall or explode or whatever the fuck it's supposed to do.