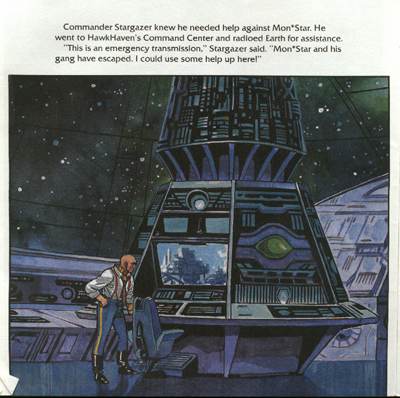 Commander Stargazer, the guy who opted to get a few hundred million pounds of metal installed into him yet refuses to use Rogaine, notices that his archenemy Monstar has escaped from the laughably incompetent Prison Trailer Planet. Since Stargazer's effectiveness is limited to "staring into a monitor and calling up the guys dressed like grey birds," he decides to phone the Silverhawks and beg them to beat up Monstar for him. In addition, he also requests, "I could use some help up here!" because Stargazer can't figure out what the hell all that goofy equipment with buttons the size of watermelons is for. I think the one on the right is a microwave or some kind of shoe-shining device. 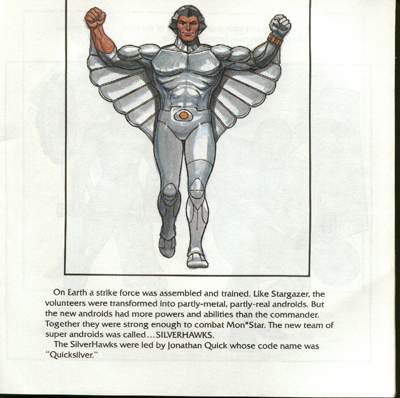 The Silverhawks are quickly called into battle, and key members of the team are instantly dipped in liquid metal so they can fly around in space and chase a glam rocker sitting inside a giant interstellar squid.Fortunately for them, they are given "more powers and abilities than the commander," which is definitely a good thing because the commander's powers are rivaled by many senior citizens. With Alzheimer's Disease. In a retirement home. Crippled from the waist down. And dead. The new team is called the "SILVERHAWKS" because in the great food chain of life, the wiley space squid always falls prey to its natural predator, the bird dipped in metal. That's simply the cycle of life and you really can't change it.