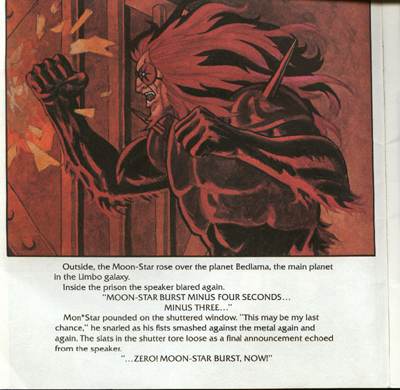 Mon*Star begins to throw a hissy fit and pound on the metal walls because those spikes growing out of his shoulders are apparently driving him nuts. Meanwhile, the Moon Star is getting closer and closer to rising, so Mon*Star just goes batty trying to catch a few rays of that crazy Moon Star. Perhaps the Moon Star removes all the hair growing off his elbows. For God's sake, don't they have Nair or Bikini Bear in the future? You'd think that if they can invent permanent face makeup that never wears off, they could at least figure out a way to prevent evil criminals from looking like bassists who were kicked out of Bon Jovi for drinking their own urine after concerts. 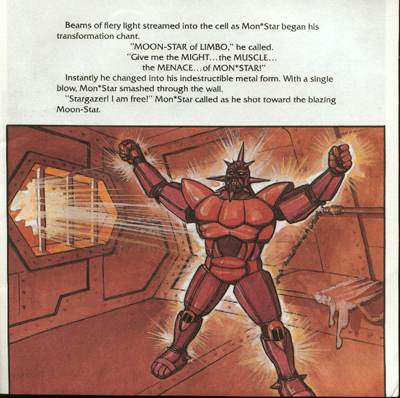 Mon*Star is somehow able to bust his way through metal, making me wonder exactly how powerful he was to begin with. If the guy can break through metal walls BEFORE harnessing the power of the Moon Star, how much of a badass will he turn into AFTER? Judging by the picture, he just becomes really shiny, loses his glam rock hair and shoulder spikes, and has a few ice picks grow from his skull. I'm not quite sure how having light shine on him causes his body to be completely encased in red glowing metal, but that at least might explain why most people die when exposed to the Moon Star. I guess Mon*Star grew from a special child into a special criminal.