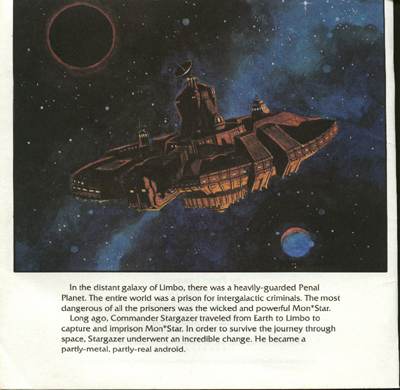 The story starts off fairly foreboding and spooky, which is just how I like my women. The "heavily guarded Penal Planet", which does not appear to be either heavily guarded nor a planet, is just kind of floating around in space. I'm not sure if there's a scale error here or what, but that satellite dish on top seems to be half the size of the surrounding planets. Maybe in the future, broadcast waves are the size of minivans.

This world, which is not a world, houses all the big bad criminals of the universe, including Mon*Star, who is both "wicked and powerful." He's also the most dangerous criminal on the planet, even more deadly than the guys who were busted for tax evasion and that one lady who stole slippers from Target. Mon*Star probably has his prison cell all to himself, because any other guy put into his cell would feel really insecure and less deadly compared to Mon*Star, and those kind of mental issues can really haunt you for some time.

We're also told the incredible story of Commander Stargazer, who imprisoned Mon*Star a few hundred million years ago. According to the story, Stargazer had to replace key parts of his body with electronics in order to "survive the journey." I'm not quite sure how implanting a toaster oven into your gut would help you drive a spaceship, but hey, it's the future and all. The result of the operation made Stargazer "partly-metal, partly-real," which means only 50% of him exists. Apparently metal isn't real in the future, and is some ethereal state of being. Like when you're drunk and think you can see through walls, I guess. 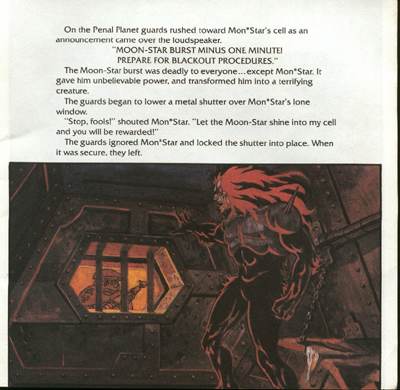 Suddenly the Penal Non-Planet is abuzz with activity, as the Moon Star prepares to "burst" in a minute. I assume it's bursting with fruit flavor, like that crazy gum the kids today eat. The prison guard, who looks remarkably like Rocksteady from "Teenage Mutant Ninja Turtles," swings by Mon*Star's cell to shut the curtains because the Moon Star makes living things contract a severe case of being dead. Mon*Star pleads to leave the shades open, as he'll gain incredibly vague and possibly unlimited powers from the Moon Star, but Rocksteady ignores him and shuts the curtains anyway. He's probably just bitter because the turtles kicked his ass at least nine times per episode.