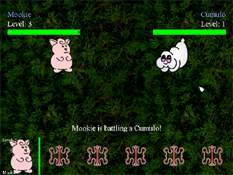 "Mookie_" battles "Cumulo". I'm not kidding. It's named "Cumulo".After catching six distinctly different BattlePets, all of which are exactly alike, you can battle with the wizard. If you defeat him, and I can't imagine why you wouldn't be able to, he'll proudly announce that you've won and you should probably purchase the full version of the game. Yeah, right. Never trust a wizard folks... especially one that owns pets who resemble icicles with faces.

How can I possibly sum up the collection of raw terror that is BattlePets? I'd call it a horrible game, but that would effectively cheapen and demean the term "horrible." I'd list the various crimes against humanity that I'd rather be convicted of instead of being forced to play this game again, but there's not enough space on this webserver for that. Let me simply end the review with this note: if you're a fan of either Pokemon or Digimon, you will absolutely despise this game. Hell, if you're a living, breathing, functioning human being, you will despise this game. However, despite all its faults and its tendency to implant the seeds of suicide into a fertile brain, it does have one redeeming quality; it will invariably make all hardcore Pokemon and Digimon fans come together and finally agree that there's a ripoff game worse than their rival titles. In that sense, BattlePets is making the world a more gentle, peaceful place to live in. However, in another sense, it's a piece of shit game that I wouldn't touch with my mother's rotting prosthetic arm, so read that however you'd like.