At a Glance: People like to go on and on about "the worst game ever". They like to pretend that they know what the most abhorrent game in the history of bad gaming truly is. Once you have played Dangerous Vaults you will be able to listen to these people blabber endlessly about "Star Wars: Force Commander" or "Hatfields and McCoys" with a smug smile on your face. When they're finished you can tip your hat, say "Dangerous Vaults is the worst game ever", and walk away satisfied in the knowledge that you just rocked their world with ineffable truth. Dangerous Vaults is a Tomb Raider rip-off that has painfully bad graphics and an interface that is almost impossible to use. Oh yeah, and the plot is about having sex with animals. Be forewarned that this review will feature screenshots of very crude 3D models engaging in sex acts. 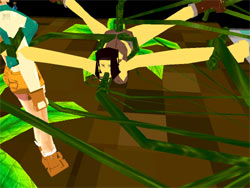 Leaves of rapes, do not traipse. I'm not the kind of guy to look a gift horse in the mouth. I love free things, but sometimes free things are so horrifyingly bad that you have to question whether that was a gift horse or its similar but less benevolent relative the curse horse. If the curse horse actually existed hidden away in the swamps and bayous of Louisiana as I imagine then it surely would have bestowed the game "Dangerous Vaults" on an unsuspecting world. Available for free download from "developer" Near Fatal's web site, "Dangerous Vaults" raises the bar for worst game of all time to unparalleled heights of shitty interface, almost incoherent artwork, and sheer bad taste.

In Dangerous Vaults you take on the role of adventuress and extremely thinly veiled Tomb Raider rip-off Tara Soft. Tara is obviously afflicted with some sort of physiological disorder that causes her chest and ass to be roughly four times the size of a normal human, while her waist and head are about half normal size. She also suffers from a bizarre leg and foot condition that forces her to wear completely rectangular shoes. This condition also cripples her movement to the point that it resembles the course of a glacier bent on gradually eroding the walls of a canyon, yet allows her to jump hundreds of feet in a single rapid leap. Tara's not letting any of this get in the way of her adventuring spirit, as we find out through the novel approach of excluding any narrative or explanatory text from the game and placing it instead in a tiny font on Near Fatal's web site.

If you're starting to feel increasingly apprehensive about this game, don't worry, your anxiety is well founded. 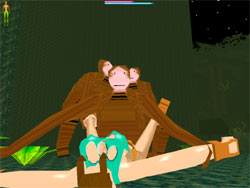 Fuck me, monkey! Dangerous Vaults comes with a training level for you to better understand the workings of the game before embarking upon Tara's full-fledged adventure to the hot and sweaty monkey loving jungle. The purpose of this trial level is actually fairly murky since the controls are completely different than they are in the normal game, requiring some sort weird mouse/keyboard combo that is a lot worse than it can be made to sound using words alone. This level just drops Tara into a barren city street where doors and buildings are completely out of scale to her and can only be accessed by crawling through an invisible doggy door. The level is pointless but you can pick up two items and "activate" two sex sequences. One is a woman who is giant and apparently homeless having a mute conversation with a robot that looks like a cross between a crab and static. They are having their little silent chat/staring contest in an alleyway but if you pick up a keycard this somehow forces the robot to molest the woman by tearing a hole in the crotch of her hobo pants and raping her slowly and endlessly.

The other sex sequence takes place on the roof of a building where you find a woman hovering above a garden and doing some sort of aerobics routine. If you pick up a blue potion you can use this to sexyify the plants into stretching the woman's arms to about five times their original length and raping her every orifice with tendrils and vines. While the scene is taking place you can pan the camera around and zoom in on the action for a "good" view. This is much more difficult than it sounds as, for whatever reason, when it zooms out the controls like to invert or worse rotate 90 degrees so that the left arrow actually moves the view forward. Like the incredibly erotic robot rape the plant molestation doesn't end and eventually you'll just feel like hitting escape and starting Tara on her actual adventure. Well, to tell you the truth you'll feel like hitting escape, exiting the game and never looking back as soon as you realize the game is full of unrestricted and inescapable clipping planes and zones of lighting where the entire screen becomes almost entirely black.