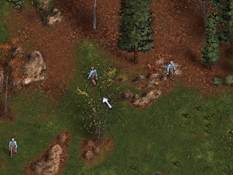 All the bad guys from level one. Notice that they all shop at same clothing store or are possibly cloned from the same inbred DNA strand. My guess is the latter.Hatfields and McCoys is very much like an anal assault, only significantly more painful and scarring. The purpose of this game (if you can use the word "purpose" liberally enough) is to shoot the opposing family before they shoot you. The game claims you can play as either the Hatfields or the McCoys, but after starting the game you'll realize you can actually only play as the Hatfields. I'm not sure why this is (I really don't care at this point) and I'm sure it doesn't even matter. Each person in this game is exactly alike and has no discerning traits or properties whatsoever. Some of the landscape actually has more character than the protagonists in this splotch of digital smegma.

The game is reportedly a "real time strategy" game, putting it in the same genre as titles such as Warcraft, Starcraft, and Command and Conquer. It's always sad to see an entire category of games degraded by a single Valu-Soft title. If I were Blizzard, I'd think about taking them to court to prohibit the release of any more Valu-Soft RTS titles. The RTS label is slightly misleading though, because although the game is definitely in real time (which isn't really that hard to do), there is not a single ounce of strategy involved. As mentioned before, the point of the game is to shoot the opposing family's members before they shoot you. Since the enemy family is limited to walking back and forth in a predetermined straight line, this is not a hard concept to master. To give the game more of an "edge", the sadists at Lupine Games decided to supply the enemies with some of the absolute worst artificial intelligence I have ever seen in a non-Intellivision title. Bad guys mysterious appear on the roofs of houses and run in place for the entire game. Enemies get stuck in between trees and resort to twitching in place and vibrating for endless hours. Your opponents will walk straight through trees, over impassible terrain, and then randomly appear in a totally different location. This, combined with the fact that every enemy looks exactly alike, makes me think that the legendary Hatfield and McCoy conflict was something straight out of the Twilight Zone. I know this game sure as hell is.

Killing the bad guys is accomplished by moving your character next to them and then clicking the right mouse button. In fact, every action is carried out by clicking the mouse buttons. This may sound confusing, but keep in mind that the only things you can do in this game are limited to:

This makes is painfully simple for even the most diehard of Deer Hunter fans out there, ensuring Valu-Soft won't get a phone call from a disgruntled redneck who can't figure out the complex controls behind their latest masterpiece. I'm sure the employee(s) at Valu-Soft appreciate this, as incoming calls simply tie up their phone lines and prohibit them from talking to their mothers on the "1-900-BARN-SEX" chat line. When shooting the bad guys, there's about a 10% chance that your gun will make any audible sound effect, so you just have to basically guess if the game registered the fact that you ordered your guy to shoot them. Heck, there's only a 10% chance that ANY sound effect will ever trigger in this game. After hearing some of the awful sounds though, this is an incredibly good thing.

Characters have one sound clip TOTAL. No, not EACH, but TOTAL. Every bad guy and teammate has the exact same voice as your player. I've been told that there are female characters somewhere in the game, and I would normally assume that they have female voices, but this is Valu-Soft so chances are they sound like men as well. Hell, they're probably just the male characters with a wig and boobs added to them. Never underestimate the crappiness of a Valu-Soft game.

Speaking of crappiness, the graphics in Hatfields and McCoys are offensive to all mankind. Characters have about five total frames of animation, and surrounding scenery appears to have been drawn by epileptic grade school dropouts. The trees, which are represented by vertical lines with branches, are essentially part of the background because your character runs across and over them when traveling (as if they were laying on the ground). Tile sets such as outhouses and redneck farms are used over and over every scene until you get to the point where you're sure every level is exactly the same as the previous one. You know, like "Jerry Springer Show" episodes, where I'm sure Valu-Soft finds most of their programming teams.