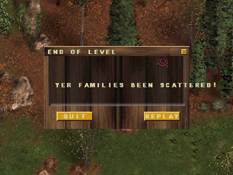 My "families been scattered!" I don't know what that means, but it is probably a bad thing.Of course we wouldn't be reviewing a Valu-Soft game if we didn't talk about the terrible bugs it contains. And my, oh my, there are bugs everywhere. The game did not install on two of my computers (something which I now consider to be a "good thing"), giving some map loading error every time I tried to play it. Hatfields and McCoys randomly crashes or cuts to the desktop for no reason. After completing a level, there's a 50% chance that the next one will never load and you will be stuck listening to the game's inbred hillbilly music for all eternity. Pressing the escape button sometimes causes the entire game to shut down. Enemies get trapped on surrounding scenery and spastically twitch in place for hours. The artificial intelligence (emphasis on "artificial") sometimes makes the bad guys completely stop and remain motionless for the remainder of the game. Even if all these bugs were fixed and the game was playable, it would still critically suck to the point where I contemplate suicide at the mere mention of its name, so I can't be too hard on the coding mistakes. I should probably thank the "coding team" for keeping the bugs in the game, as they gave me an excuse to quit playing it.

So, in summary, Hatfields and McCoys is essentially what you'd expect the game to be: really bad. It's a typical Valu-Soft game, a title that stinks of failure and wasted lies. There are absolutely no redeeming qualities to this game whatsoever. I hate this game. I hate it more than I've ever hated any other game before. It makes me furious to even think of this game. The name "Valu-Soft" brings up so much acidic bile to my throat that I could spit and dissolve an entire houseboat. If I ever meet a programmer who was ever remotely associated with Valu-Soft, I will punch them in the mouth and damn their mother to hell. If they're related to Valu-Soft employees, chances are they're going to end up there anyway.

In the event that somebody accidentally bought you this game or you lost a bet and have to play it, here are some Hatfields and McCoys game hint translations (ripped from their support page):