Speaking of enemies, the bad guys do a perfect job of following the development team’s motto, “It doesn’t HAVE to make any fucking sense! It’s LIGHT-HEARTED!” You’ve got your scythe-wielding guys that can walk 60 miles an hour, obese women who strictly obey the FPS genre’s “big and fat = takes a ton of hits to kill” commandment, flying chickens who start flying even faster when you shoot their feathers off, bulls pigs that charge and stop randomly, and a handful of generic enemies with various different guns. They look pretty stupid to begin with, and they look even stupider once you realize that the majority of them think repeatedly running into the wall is a viable combat tactic. 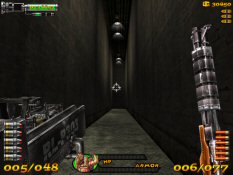 Just stare at this screenshot for two hours, it'll save you the trouble of actually downloading the demo.Normally sound in an FPS isn’t a big deal to me, but in this case I think Delphieye deserves a special mention for their horrible choice of music. The menu music is some generic pop-punk song that I’ve thankfully never heard before, but it pales in comparison to the in-game music. Delphieye has attempted to find a totally fresh song that would be hip, now and wow for American audiences, and you know what they decided we stupid fat Americans would like to have blaring while we play? Original Prankster by the Offspring. This incredibly annoying song might not damage your sanity too badly if you only hear it once or twice on the radio, but Nitro Family showed me that you can only listen to it about six or seven times in a row before your embattled brain cells begin spontaneously detonating and mercy-killing each other in a symbiotic process of mutually assured destruction.

The level design isn’t any better, as the designer suffers from claustrophilia or whatever you’d call the condition that makes you think people really love spending hours marching down identical hallways. Big hallways, hallways you can barely fit through, tall hallways, short hallways – everyone loves a hallway! Well, you’d better love them, because both demo levels consist almost entirely of square rooms linked by rectangular hallways, and sometimes just a bunch of rectangular hallways stapled together in the middle of nowhere. If you ever find yourself in an area that isn’t a hallway, that means you either took a hallway to get there or you’re going to enter another hallway once you’re done killing the latest screaming horde of enemies who feel the need to rush right up in front of you even though they’re armed with machine guns.

But don’t worry, you won’t have to spend the entire time staring at hallways, since the developers have taken it upon themselves to add one of the bullet time ripoffs that second-rate developers have been shoehorning into their games ever since Max Payne. If you want some visual variety, just fire up Ecstasy mode, which activates automatically after you’ve killed enough enemies. It changes the music, which cannot be appreciated enough, and the visual effect ranges from “slow everything down” to “slow everything down and make the entire screen into a mass of swirling white so you can’t see anything and you will undoubtedly die within seconds.” 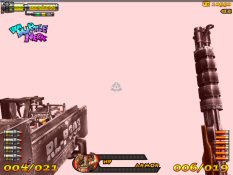 WHAT A USEFUL POWERUP!The demo also has a large share of bugs, which seems to be a theme with all the recent games I’ve reviewed. Reloading sometimes causes the guns to get perpetually stuck in the reload animation, and after that happens, it’s anybody’s guess as to whether pulling the trigger will just reset the reload animation or fire a shot despite the fact that the number says you have zero ammo. The sound will occasionally begin to sound muted and distant for no apparent reason. Some enemies, particularly the fat women, will frequently slip and fall into the floor, at which point they will begin running around inside of the floor and hitting you repeatedly while you sit there wishing you had a way to hit them back. Sometimes when they fall into the floor they’ll just sit there and pop back up later, or they’ll just slide around the map with their head poking out of the ground. One time, after clearing one of the many hallways of enemies, I heard a very distant gunshot and mysteriously took damage. I turned around trying to figure out what the hell was going on, and saw a shot come flying out of the wall and hit me. I followed the direction that the shot was coming from, and it turns out an enemy a good distance away had gotten his feet stuck in the ground, and this somehow gave him the power to fire from that spot and hit me no matter where I was. The demo also had issues with crashing, but after battling my way through endless halls and square rooms, I welcomed the crashes with open arms.

Nitro Family really sounded like an interesting idea, since I enjoyed Serious Sam and the dual-weapon setup seemed perfect for a frantic action game. Sadly, it looks like Delphieye spent their entire development cycle working on their combo system and dreaming up new wild and wacky enemies, and neglected to fix any of the bugs or hire someone who was good enough with Serious Editor to make shapes that aren’t cubes. As bad as the final result was, the game really could have had potential. My advice to Delphieye is to overhaul the enemy design, enemy AI, sound volume balancing, background music, story, purchase system, weapon design, level design and then, ideally, go bankrupt.