Western Outlaw: Wanted Dead or Alive tells the touching story of a man called the Stranger, a man who bravely stands up to the nefarious “Creston” and his army of inbred clone soldiers. But what are they trying to do and who is the Stranger and what are any of them doing in this game? I sure as hell don’t know, so maybe the box can enlighten us.

You are an OUTLAW. Framed for a crime you didn’t commit, you must use your skills as a gunslinger to evade the law and fight to stay alive in a corrupt town where everyone wants you dead. 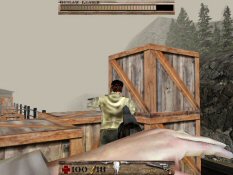 This highly intelligent boss must be an ancestor of one of these fine gentlemen.Ooh, spooky! Don’t worry though, the “if you’re still alive” part becomes a lot less chilling when you start to play and realize that no one besides the publisher who gave this game the green light could possibly be stupid enough to get killed by these enemies. The game opens with a gang of identical bandits trying to rob a train while wearing red handkerchiefs on their faces because hey, that’s what bandits are supposed to do. One of the bandits stalks around with his gun asking “So, are there any heroes here?” No one answers his cleverly hidden threat, so the scene fades out, only to fade back in two seconds later with everybody in the exact same places, only now the Stranger has used his mysterious cowboy powers to materialize out of thin air.

This begins the first level, which pretty much consists of running back and forth trying to shoot the bad guys before they have a chance to run away screaming or teleport through the wall and disappear. What is this train carrying, you probably aren’t asking? If you have to ask that then you’ve forgotten that this is an FPS, so naturally the train is loaded with a metric ton of crates that exist solely to get in your way and piss you off. The whole time you’re making your way across the train cars, more bandits will ride along side and fire at you until you turn and shoot them, at which point they’ll fall off and the horse will turn into a transparent ghost horse and either sink into the ground or blink out of existence.

At the end of this wonderful journey, you’re confronted by the leader of the train robbers, who apparently really hates it when someone magically appears on the train and shoots all of his men in the face. He opens fire with a shotgun, but fortunately you have an advantage! Well, two advantages if you count the fact that you can take cover behind one of the 400 crates littered all over the place and you’re guaranteed to never get hit. But if you’re really intent on killing this boss and getting to the next level for god knows what reason, you’ll have to employ a powerful combat tactic known as “running behind him.” If you simply stand up and run behind the boss, he’ll keep facing the way he was before, patiently waiting for you to walk back in front of him. It doesn’t even break his concentration when you start shooting him in the back of the head, and he simply stands completely motionless while you empty your guns into the base of his skull. 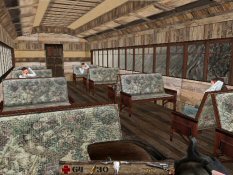 After seeing that he went through all that trouble to rescue three identical twins, our hero wisely decides to turn the gun around and shoot himself in the spleen.After the train stops, you end up talking to a woman named Polly, who makes a valiant attempt to explain the plot but fails miserably. Apparently the town they were going to is a mining town, and the train robbers were working for a guy named Creston. Not only that, but in her own words, “If you don’t do something about Creston, he’ll rape this town and everything in it!” Oh no! Town rape is certainly no laughing matter, so our slightly confused hero vows to take care of this Creston guy. Once he does that, Polly walks out of the room and all of a sudden the house is filled with enemies. They don’t come from anywhere, they just spontaneously appear in every single room in the house, and one of them appears five feet in front of you. I really don’t understand how the bandits pulled off that trick, but then again I’m dumb.