After you kill all the bandits and leave the house, the game gives you what every FPS player really wants – a nice, long trudge in the forest without encountering a single enemy. Seriously, there’s an entire level devoted to just walking in straight lines for 20 minutes. After spending a good long stretch of time plodding through a rainforest that somehow popped up in the desert around this woman’s house, you come across a train station! Hooray! But nope, that isn’t the end of the level because the station is abandoned! But once you get through a couple jumping puzzles, you know where you get to go? BACK INTO THE FOREST WITH YOU, BUDDY! After doing some more plodding you end up at the game’s second boss, and although I didn’t know it at the time, you’re already two thirds of the way through the game. 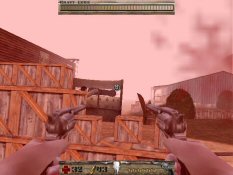 One of the lesser-known inventions of the Old West: the backfiring machine gun.The second boss is some guy named Wild Bill, who was sent to kill you and managed to find you by hanging out in a tiny little town in the middle of nowhere and waiting for you to stop by. After he sits there and lets you gun down 30 of his men, the following exciting conversation ensues.

Wild Bill: Mind your own business or I’ll have to show you mine.
You: I guess I’m buying!

Nope, I don’t know what the fuck they’re talking about either.

After you kill him and move on to the next tiny town, danger strikes! Polly, the woman who talked to you at the beginning and disappeared, apparently reappeared here and got groped by one of the bandits. She runs out of a nearby barn saying “No, get your hands off me!” and runs behind a big crate where luckily there happens to be a loaded shotgun, so she grabs it and blows the guy away. You observe all this from a nearby tower that you magically appeared in with a sniper rifle, so when the rest of the bandits try to rush her, you get to sit there for several minutes sniping all the bandits when they emerge from the barn. If you climb down from the tower and go around back and enter the barn, a bug will make all the enemies invincible and after a while one of them will kill Polly. If you manage to kill them all, then some guy will ride by and kidnap her and take her to the evil Creston. I have no idea why. And a few minutes later you get to fight another boss who’s almost exactly the same as the one you just killed! However, the conversation that precedes this boss fight is very different.

After blowing up a guy with dynamite when he opens fire with a magical machine gun that can hit you no matter which way it’s facing, you get to fight your way through several identical houses and sit through a mine cart level before reaching the final boss, which is a chariot containing Creston with a number of horse-riding bandits around it. The bandits (who don’t have any reins attached to their horses, but still pretend they do) constantly ride up beside you and sit there doing nothing until you kill them, and after you kill enough of them Creston opens up the chariot door and lets you shoot him once. Once this cycle has completed five or six times, you kill Creston, pull Polly out of the chariot (since she’s too stupid to get out herself) and sit on your horse with her while it awkwardly waddles away into the distance and the credits roll. I don’t know what this short little story has to do with the description on the box, since I was never framed for a crime at any point in the game, but hey, it meant I could exit this shitty game so I wasn’t about to argue.

The only thing that makes this game interesting is the magical abilities the enemies possess. These powers include, but are not limited to: 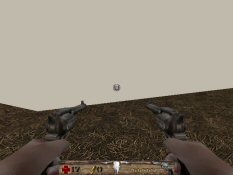 It's the edge of the world!

Walking right up in front of you, pausing, and then repeatedly yelling “Where’d he go?” while running around in circles.

Carefully leaning out to shoot and taking cover to reload even though they’re out in the middle of nowhere and aren’t actually hiding behind anything.

Teaming up with nearby enemies to hold out their arms and perform a weird synchronized shuffling ballerina dance.

Missing a point blank shot from two feet in front of you while another enemy repeatedly shoots you through the wall.

But don’t worry folks, our old pal “The Stranger” has a few tricks up his sleeve as well! His hobbies include:

Getting stuck in the side of a barn.

Getting stuck in the side of a cabin.

Getting stuck in a chimney.

Getting stuck in corn.

Getting stuck in the bed of a train while the game gives him very unhelpful advice.

Western Outlaw has now made it painfully obvious to me why westerns never make good games: because westerns suck. I had somehow forgotten this seemingly unforgettable fact, and have now paid the price by torturing myself for literally minutes with this piece of shit. Now if you’ll excuse me, I’m going to start down the road to healing with the help of the uninstaller.