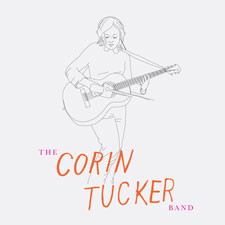 I've been listening to The Corin Tucker Band's debut album 1,000 Years for a few weeks now, thanks to a publicist who was kind enough to overlook my terrible nickname and mistake me for an actual music writer who knows what he's doing.

My knowledge of music theory runs as deep as my insight into string theory (I'm reasonably sure both involve guitars, and that's about it). In attempting to describe the sounds of instruments like a proper critic, I would probably use the wrong adjective, calling a guitar "crunchy" when I should call it "relentless." Technically speaking, I should probably be shot just for putting headphones on.

I tell you this not as an act of prideful ignorance, but to let you know where my potentially terrible and assuredly biased opinions come from.

Music has an effect on me, and rather than analyzing the hows and whys as much as I should, I tend to let myself get caught up in the moment. The farthest I've gotten is realizing that:

1) I love rock music the most when it teeters on the edge of becoming a total chaotic mess, only to wind up doing something that gives you chills. Good chills, not "did they really get a choir to hum a native American chant and overlay it with rubber duck squeaks?" chills.

2) On the rare occasion that a singer conveys genuine emotion, I'm in with them all the way. You could sing about having too much money to spend, and I would shed a tear for you. Plead for me to kill my parents, and I will absolutely bawl.

All of which is to say that Corin Tucker's previous band Sleater-Kinney is one of my favorites of all time. With Janet Weiss on the drums, the dueling guitars and vocals of Carrie Brownstein and Corin Tucker made for a unique dynamic. Their voices were similar enough to play off each other when needed, but different enough to diverge and pull the listener in two directions while the guitars made noises I shouldn't even attempt to explain.

Corin's voice was powerful - not just in sheer volume or quality, but in its ability to seemingly cut through everything and compel you to listen a little closer.

When I found out about her first project since Sleater-Kinney's The Woods (an album so strong that the band's hiatus was doubly painful), I was a little worried that the result would be something like her previous band, only without the chemistry that made it work so well. Think Scott Stapp attempting recapture the glory of Creed, or anyone from Van Halen doing anything.

Thankfully, I was wrong. 1,000 Years does something entirely different. Even at it its loudest ("Big Goodbye" and "Doubt"), it is relatively restrained and straightforward. Corin never lets loose at the top of her lungs, but the whole recording comes across as so intimate that her voice is every bit as effective as it has ever been.

In a way, the album reminds me of Pearl Jam's Backspacer. Both seem to concentrate on stripping out as many layers as possible between performer and listener as possible, presenting music that is less about being challenging than putting each band's personality at the forefront in songs that are enjoyable on the first listen.

That's not to say that the two sound the same, of course. While Backspacer is more upbeat and boisterous as a whole, 1,000 Years tends to lean towards the introspective side.

One song in particular, "It's Always Summer," is a great example of the album's ability to bridge the gap between haunting and hopeful while being the sort of song that can embed itself into your skull and be the first thing you think of in the morning.

I can't say how The Corin Tucker Band's debut will hold up in the long run, but I've listened to it at least once or twice a day for a few weeks without skipping a track, and have come to enjoy it a little bit more each time around.

Of course, I might be wrong. The guitars could, in fact, be relentless.

Note - If you're interested in any of the music that I've talked about today, check out the following:

This classic drawing of a skeleton in underwear being electrocuted 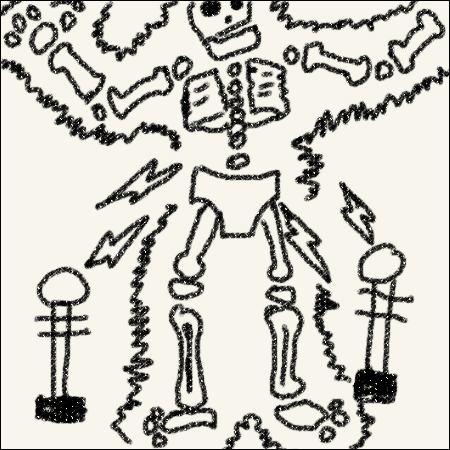