Sometimes, I can't help feeling retroactive rage about the loathsome acts who roamed unimpeded during the lawless '90s. These defunct artists remain as safe as protected witnesses, blissfully shrouded in obscurity. Fortunately, I prepared for the future by stuffing a time capsule with thousands of glossy band photos, which I just exhumed from its burial cocoon deep below that geriatric neighbor lady's lawn. These images make grave desecration educational! Glossy Archives provides an experience akin to digging up a fossil, recreating what the extinct creature looked like, then ridiculing the dead dinosaur for its puny brain and stupidly small arms. 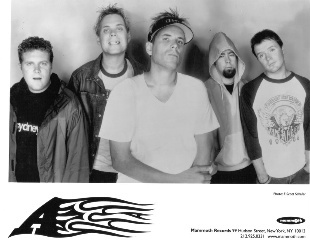 A: I'm beginning with "A," an English group whose name-selecting process surely included the thought, "hey, any sequential round-up of musical entities now has to start with us! Score!" Presumably, when A formed in 1995, its members didn't quite understand that burgeoning technology would soon allow computer users worldwide to instantly find bands, as long as they hadn't selected some idiotic search-engine-thwarting moniker like "A." (A Yahoo! search using the terms "A" and "band" misses the group completely, instead yielding hits such as "Dr. Joya's gastric band surgery" and "Iliotibial Band Friction Syndrome.") The group's fiery logo displays a similar lack of forethought, as it conjures the connotation-rich phrase "Flaming A." A also released a single called "A," demonstrating how this obsession with alphabetical primacy dominated every aspect of their musical lives.

From left, A includes a doppelganger for runtish actor Sean Astin, at the height of his underdog Rudy appeal, mouth still hinged with "Put me in the game, coach" eagerness; a vaguely creepy hockey-teethed grinner with tousled-straw hair; a guy in a visor sporting the same fucking cocky expression guys with visors always have plastered on their smug "Look at me, I'm shielded from the sun!" faces; a dude whose half-mast eyes, goatee thicket and hood-up sweatshirt make him look like a melancholic monk, even though he's probably just a stoner; and a baby-face in a ¾ sleeve Van Halen 1984 shirt, cocking his head to the left like a curious puppy. 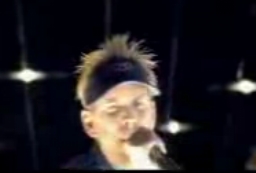 This A guy even wears his visor in videos.As for what kind of music A played, if you guessed pop-punk, you win nothing, because really, how fucking hard was that? The vocals didn't really match the chugging-cord structures: It was as if that reedy-voiced castrato hobbit from Yes was fronting Blink-182. A made a video (interruption - the name A makes every sentence look retarded - resume) for "Starbucks," a song that contains the chant "don't want your job at Starbucks." It's unknown whether any of the group's members had to traverse that burned bridge and humbly accept barista work after A dissolved in 2005.

A was a pretty big deal back home in the UK, winning a Best British Band award in 2002, but this was one of those Robbie Williams-style contagions that diminished in infective strength while crossing the ocean. A still ranks first in especially comprehensive musical encyclopedias, but rates significantly lower on most "all the bands I've ever heard, chronicled in order of quality" lists, delighting only people who've always wanted to hear Offspring Lite jam with a laryngitic Perry Farrell.