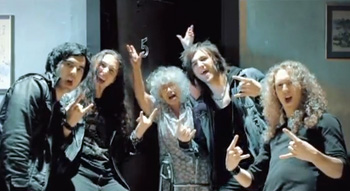 GD: What do you think a real priest would do if some dude came into the confessional and started singing like that?

het: I wonder if the woman wearing the Roman collar at the beginning really puts this over the edge for the Vatican. Like they're used to pop culture sexualizing nuns and such, but women can't be priests, dammit!

kcw: What the hell is this? Every bit of it seems intended to piss off parents and nothing else. I doubt it would even do that very well. They'd probably just assume it was a Weird Al parody of Van Halen.

het: What a bummer, this dude goes from hot lesbians to a granny answering the door. And the granny doesn't even like metal, double bummer.

GD: The dude wasn't into the hot lesbians anyway. He got frustrated that they didn't care about his fliers and left in frustration. Oh, the fake old man in this video is totally the same fake old man on the far right in this Garth Brooks ad!

het: He's in every video I bet, if you look hard enough. Whoa, this Kanye outburst is the probably the stupidest thing I've seen in a long time. I'll give it to them that it was unexpected -- I was not expecting something that dumb.

het: If you're filming a video like this, just how fuckin' topical can you be? Maybe in 3 months, they'll release a video where Jay Leno takes over the lead singer's duties.

But here's the thing, I kind of enjoyed the song. It's dumb fun, but it's fun nonetheless.

GD: But the video ruins what could have been the best part of the song, the final chorus kick-in. It deflates the big dumb fun balloon.

het: Yeah, I mean I was all ready to mumble "halle-fuckin-lujah" while glancing around sort of hoping nobody notices.

kcw: TITS! That was fast. The objectification usually takes at least .75 seconds to kick in.

het: If there's a Kanye joke in this, I'm not clicking any more links from you.

GD: Nope, just a lot of rock dudes saying "bumpin.'" And a guitarist who really likes to make the "I can't believe my good fortune" face.

kcw: If I got paid to pretend to play guitar, I'd make that face a lot too.

het: I think this band misunderstood the phrase "dumb fun" to imply that anything dumb was fun.

GD: Maybe we'll find some answers within the ALL-CAPS BIO on the MySpace page of STEADLUR (Drummer & Bassist Wanted).

het: "Steadlür, the latest rock vibration from Atlanta straddles that elusive, yet happy line between teenaged rebellion and being accepted by the masses with their self-titled Roadrunner Records debut." (Not being accepted by the masses was THEIR STYLISTIC CHOICE!) "Steadlür are putting the 'rock' back into rock band with their youthful aplomb." (I just like reading "YOUTHFUL APLOMB" in all caps.) 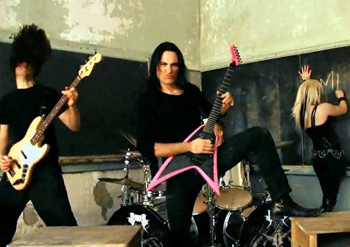 GD: These guys have acknowledged this was a joke, but what are they expecting to get out of this? I mean, their grim frostbitten jackass fans don't get it (see YouTube comments), and the people who buy this album thinking the whole thing will be Steel Panther will be angry as well.

GD: A metal song finally connects with kingcobweb. *Is a parody of the genre.*

kcw: Noooooo! Hey, I have my token metal band I enjoy... when they don't sound too metal. And, uh, Mt. Eerie TOTALLY counts.

Anyway, these guys seem quite happy to be rocking. Is someone really forcing them? I mean, no one is forcing me to eat Cheerios, I just like them.

GD: What is the most metal cereal?

kcw: Definitely not Cocoa Puffs, that's for sure. Juding from these videos and nothing else, I'd say Kix.

GD: Of course it's fucking Kix, how could I forget?

het: I know these guys think it's a joke, I just don't think they know why. Also, I like this comment: "It's gay, this is all thrashy and hairy metally and not melodeath." Oh no, the purity of my melodeath has been polluted by thrash metal! I'm not sure that dude knows what words mean.

GD: What parts do they think are a joke? 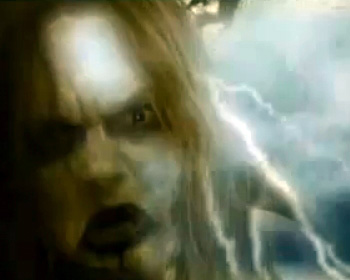 GD: This intro part with the whimsical music and the walking skeleton is like a King's Quest cutscene.

het: "Gloomy Grim's 'Life?' is available on CD or 28 floppies. It has a bonus track, but you have to solve some puzzles before you can listen to it."

Man, why are they taking so long to show the head of the skeleton?

GD: They only show the singer from the neck up, maybe he *is* the skeleton.

I like how they keep dissolving between the dude's face and stuff on fire. I feel like if he really made a commitment to the band he'd just set his head on fire and they could kill two birds with one stone.

GD: "I bet you're just wearing corpse paint to seem grim and brutal." "Well, actually, my face is covered with second-degree burns, and I wear this make-up so I can feel human again." *Accuser feels ashamed.*

het: I like the spelling out S-A-T-A-N when he says SATAN. Whatever happened to the subtlety of backmasking and single-frame subliminal messages?

GD: There should have been a bouncing ball -- no, a bouncing SKULL -- over the letters.

het: A rotating bouncing skull on fire. Basically just take a GIF off any metal fanpage from 1998.

GD: If it were the skeleton's head, then the video could have come full circle! Missed opportunity, Gloomy Grim.

het: Seriously. These guys have no sense of storytelling.

kcw: One of the guitarists is doing the hair twirl (B+), but the other guy is just moving the hair up and down. Step your game up, the other dude is making you look bad!

GD: The guy who sucks at headbanging is going to get dumped in a ditch.

GD: Hey, nobody forced him to rock.